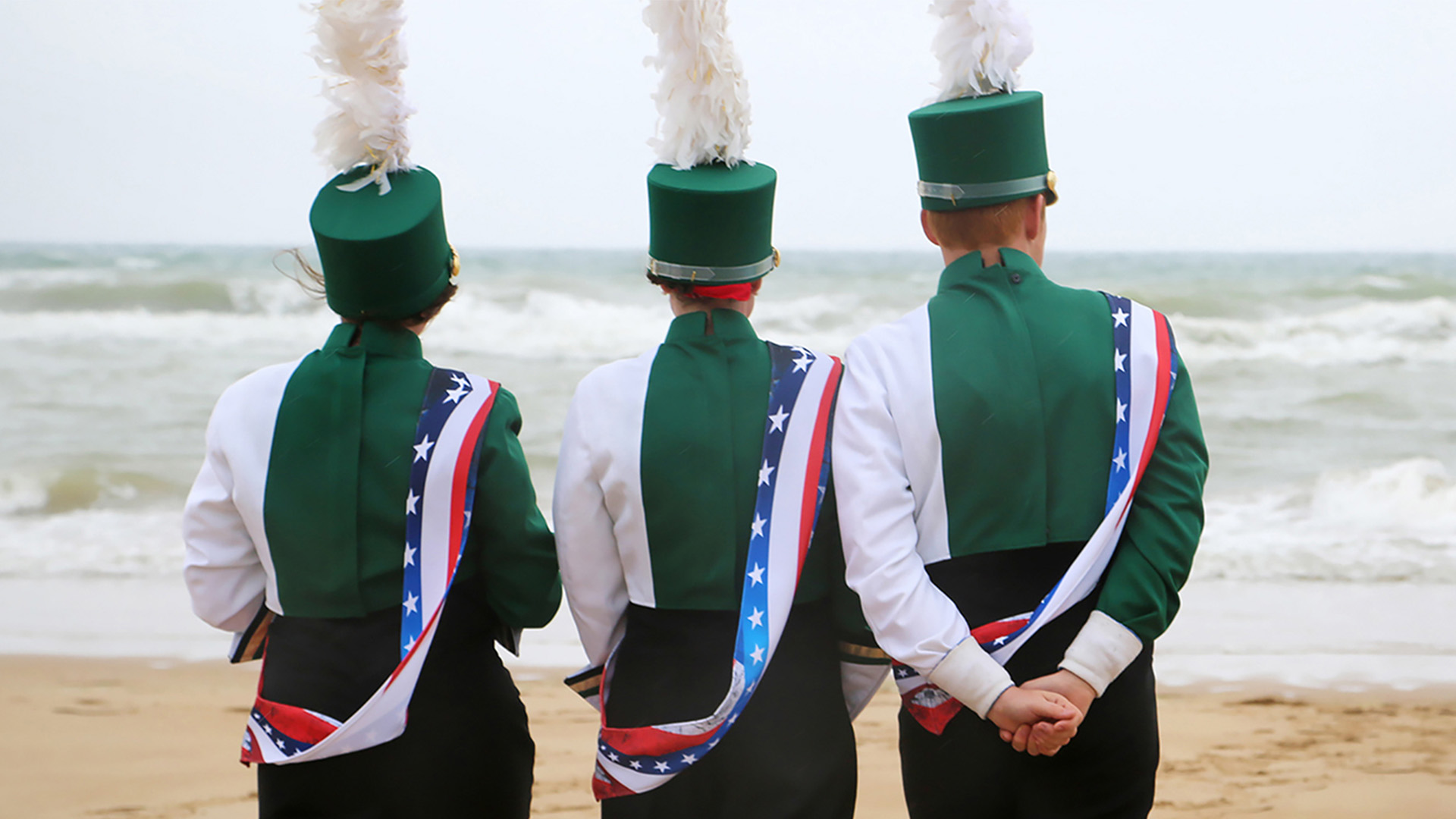 Omaha Beach was at the same time soft and resilient. Spongy underfoot, as if it might absorb the weight of the world, but decidedly pushing back, and forward.

These sands were the stage as the Pride of Niner Nation Marching Band culminated its 2018 tour of Normandy. The band performed at commemorations marking the anniversary of D-Day, the invasion that reset the course of history in 1944. Post-concert at the Normandy American Cemetery, band members moved reverently to the beach, planting flags that bookended the send-off ceremony back on campus the week before. 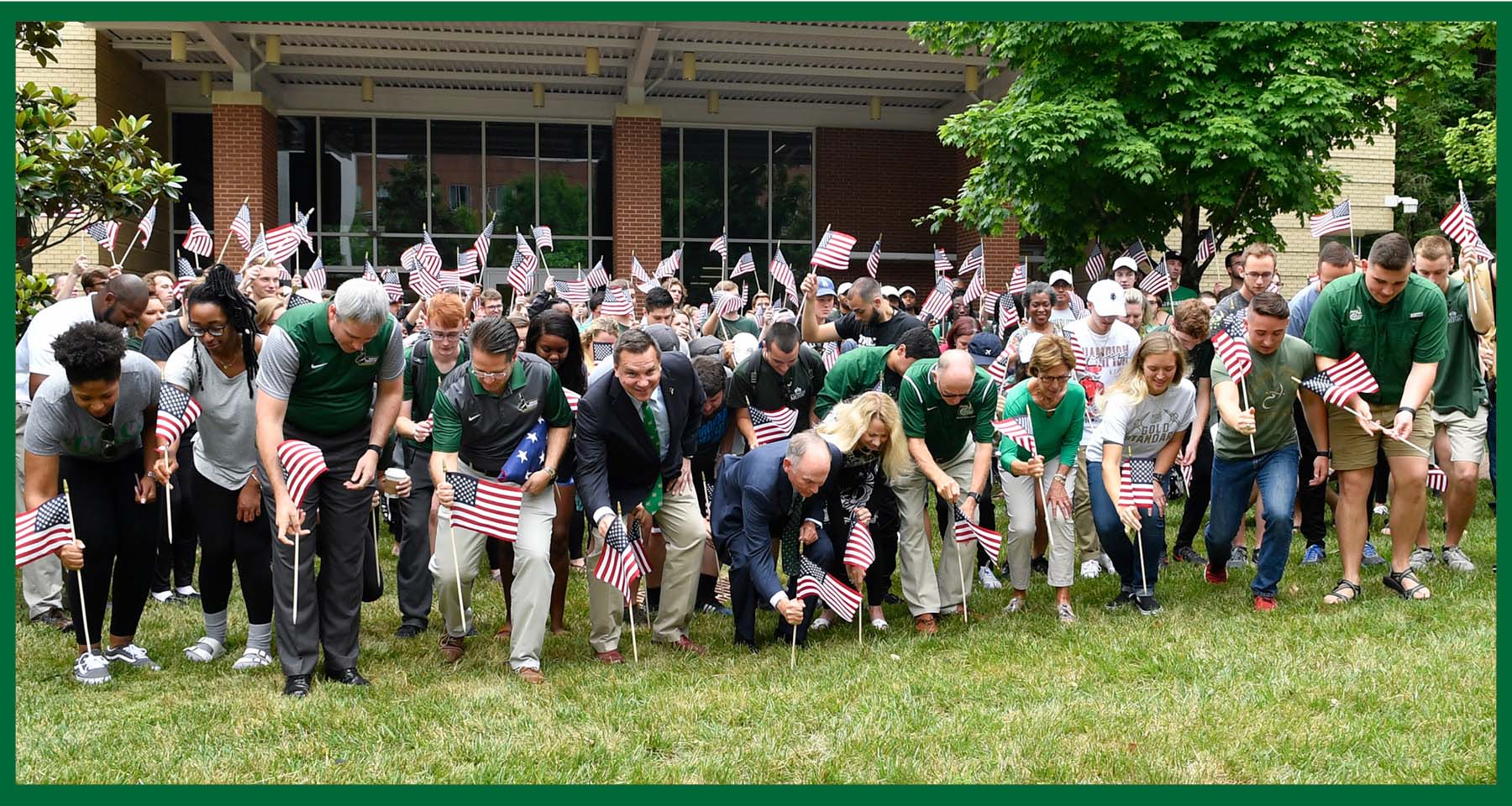 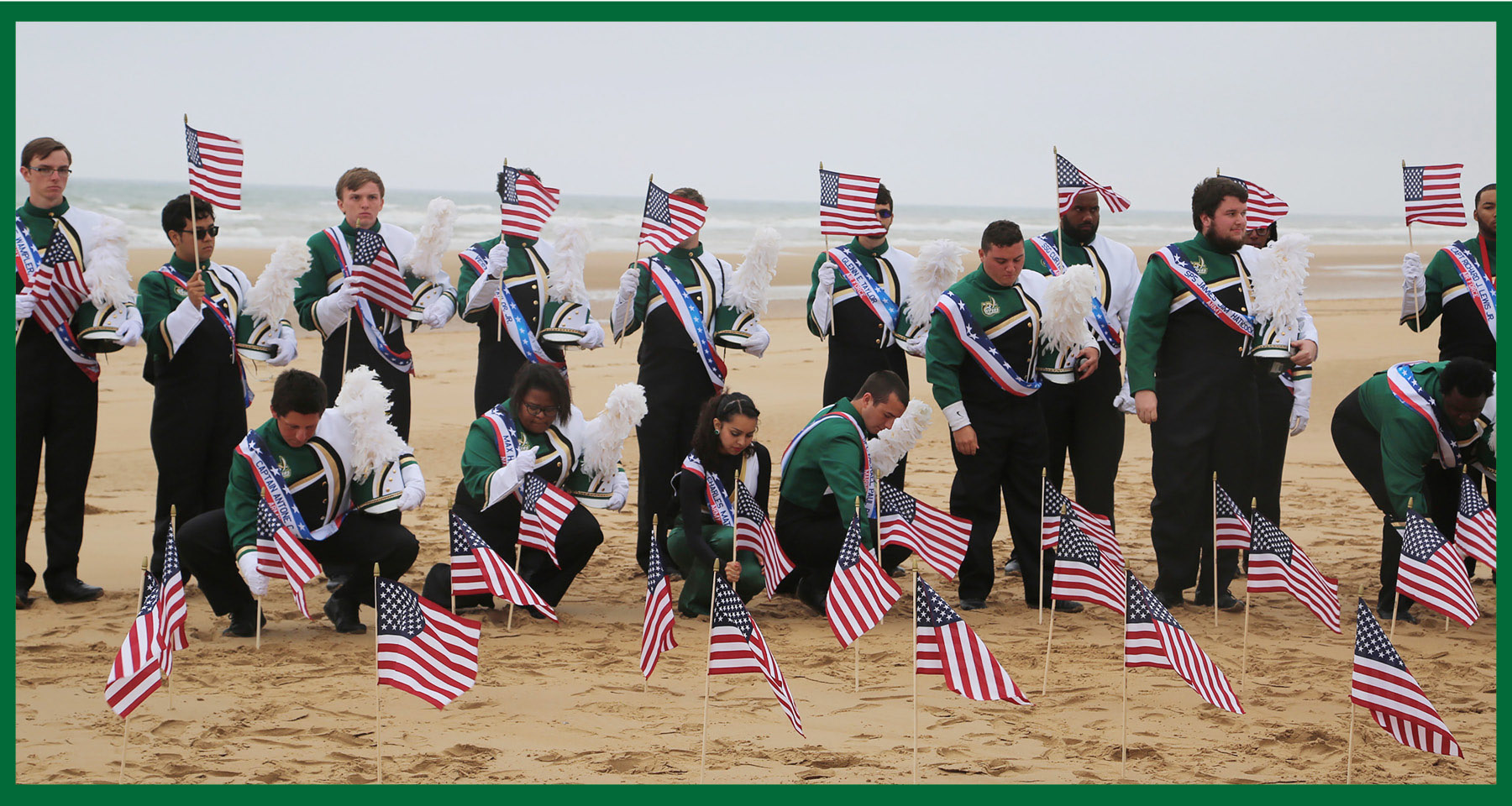 “When I stepped onto that beach I was overwhelmed,” said Assistant Drum Major Madelyn Palko, a senior from Concord.

“It’s hard to explain. All I could think about was how young they were and how they were taken so unfairly from this world while fighting a vile enemy. I can’t imagine the fear they experienced knowing that they would most likely not make it off the beach. I just hope they knew that I was there with them at that moment and that I felt everything.”

Palko’s reaction was shared on faces and in words throughout the band. The group of mostly Millennials, the largest single UNC Charlotte contingent ever on an overseas experience, stood and then knelt where thousands of Greatest Generation counterparts fought and died 74 years before. 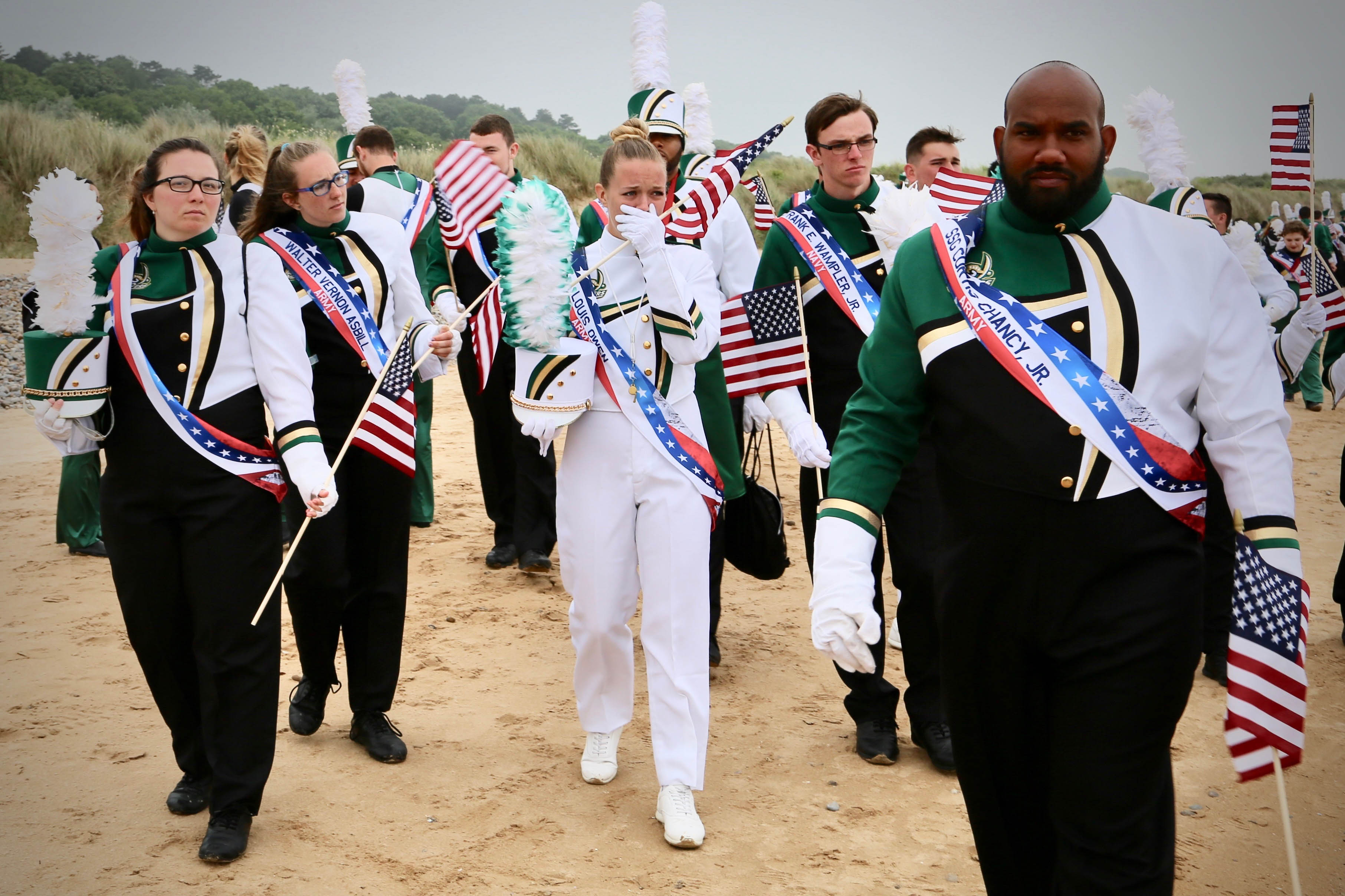 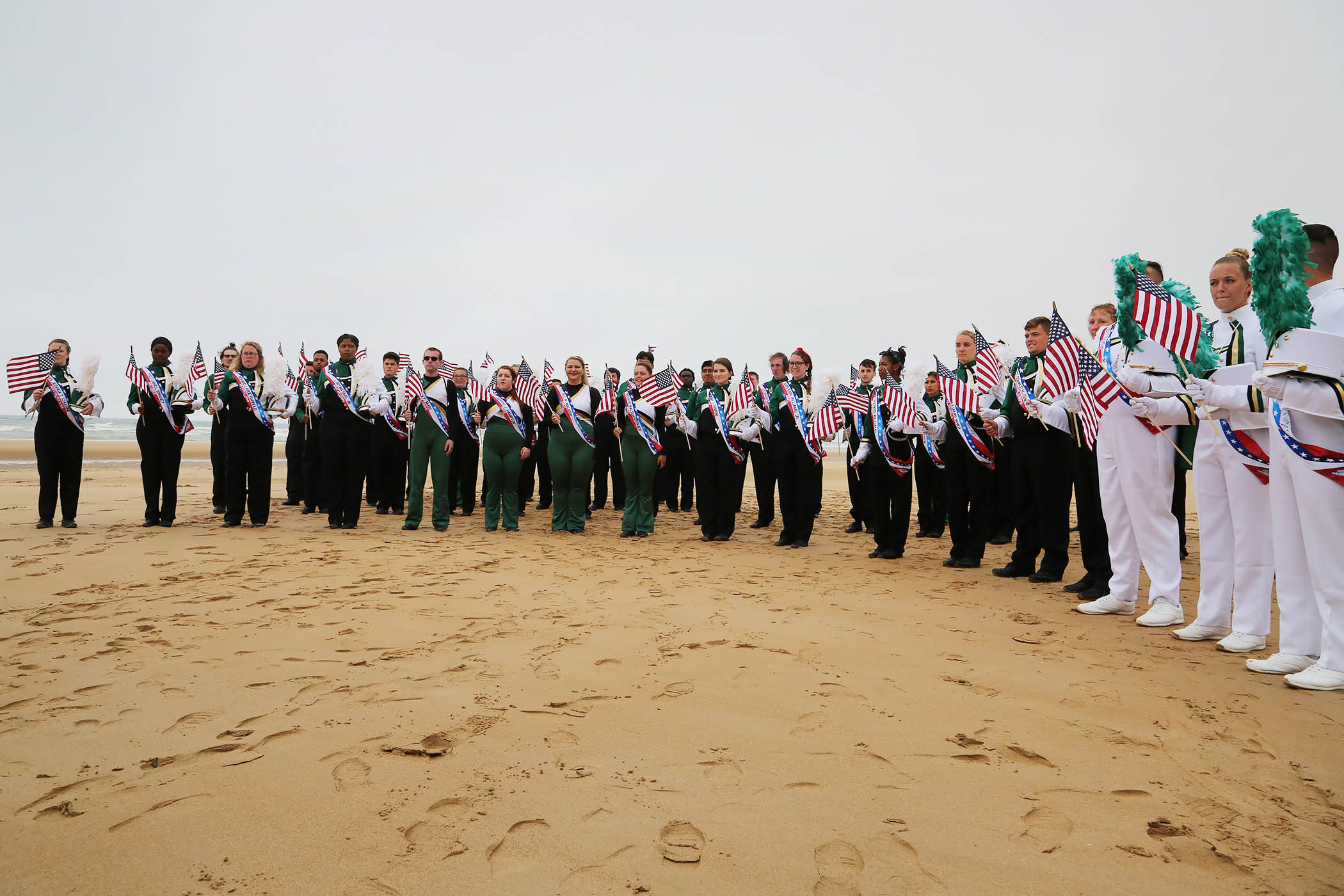 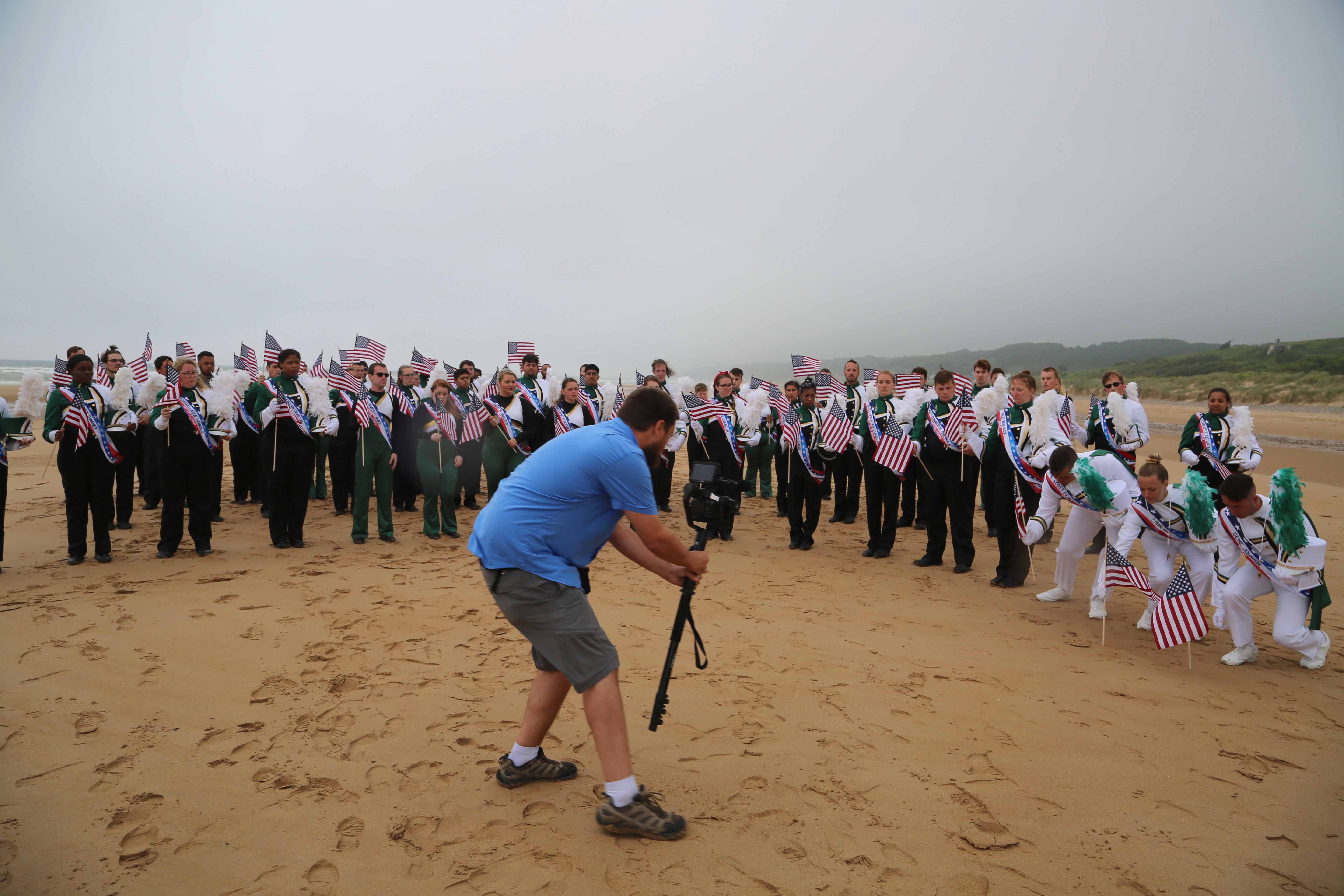 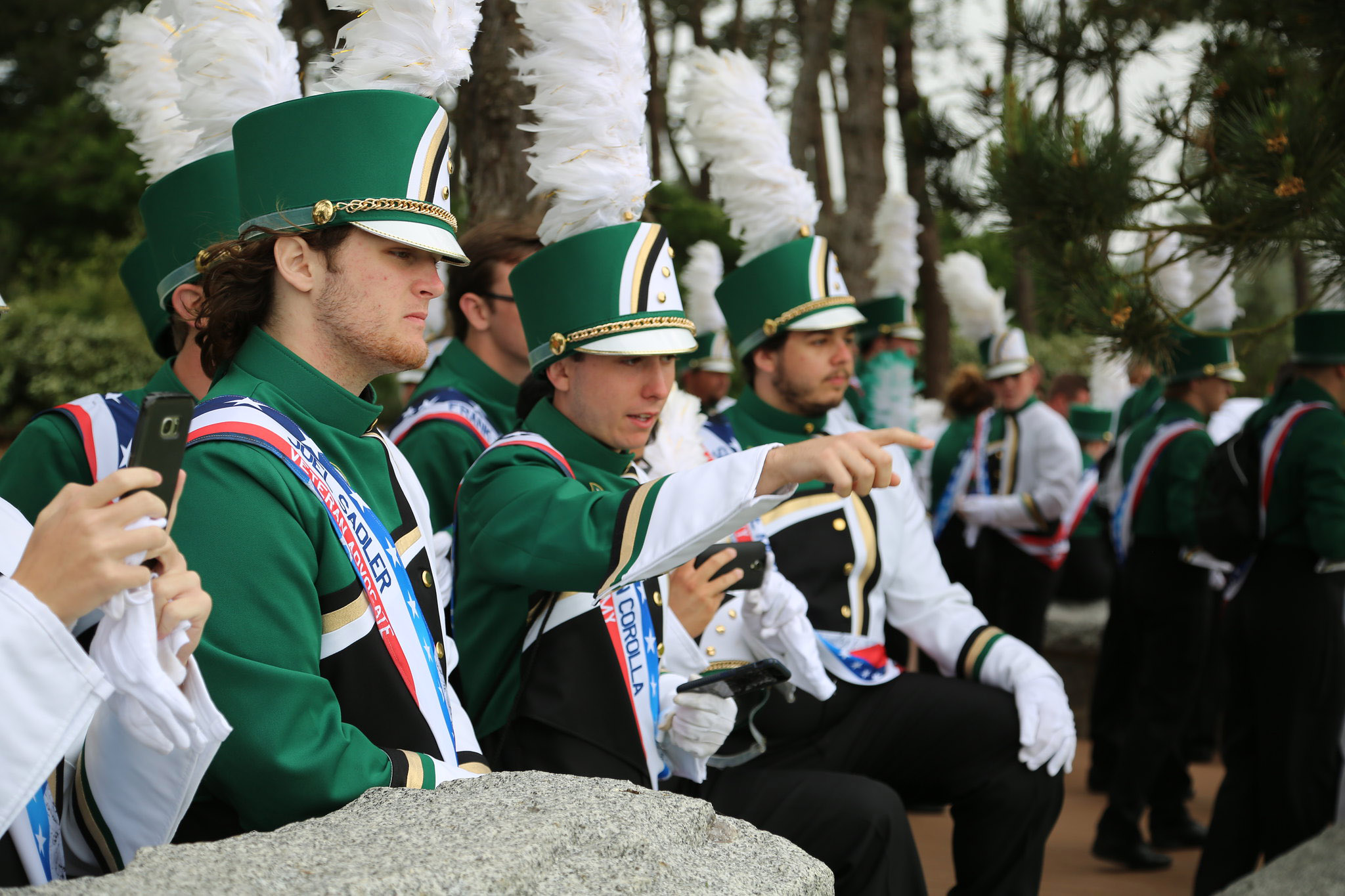 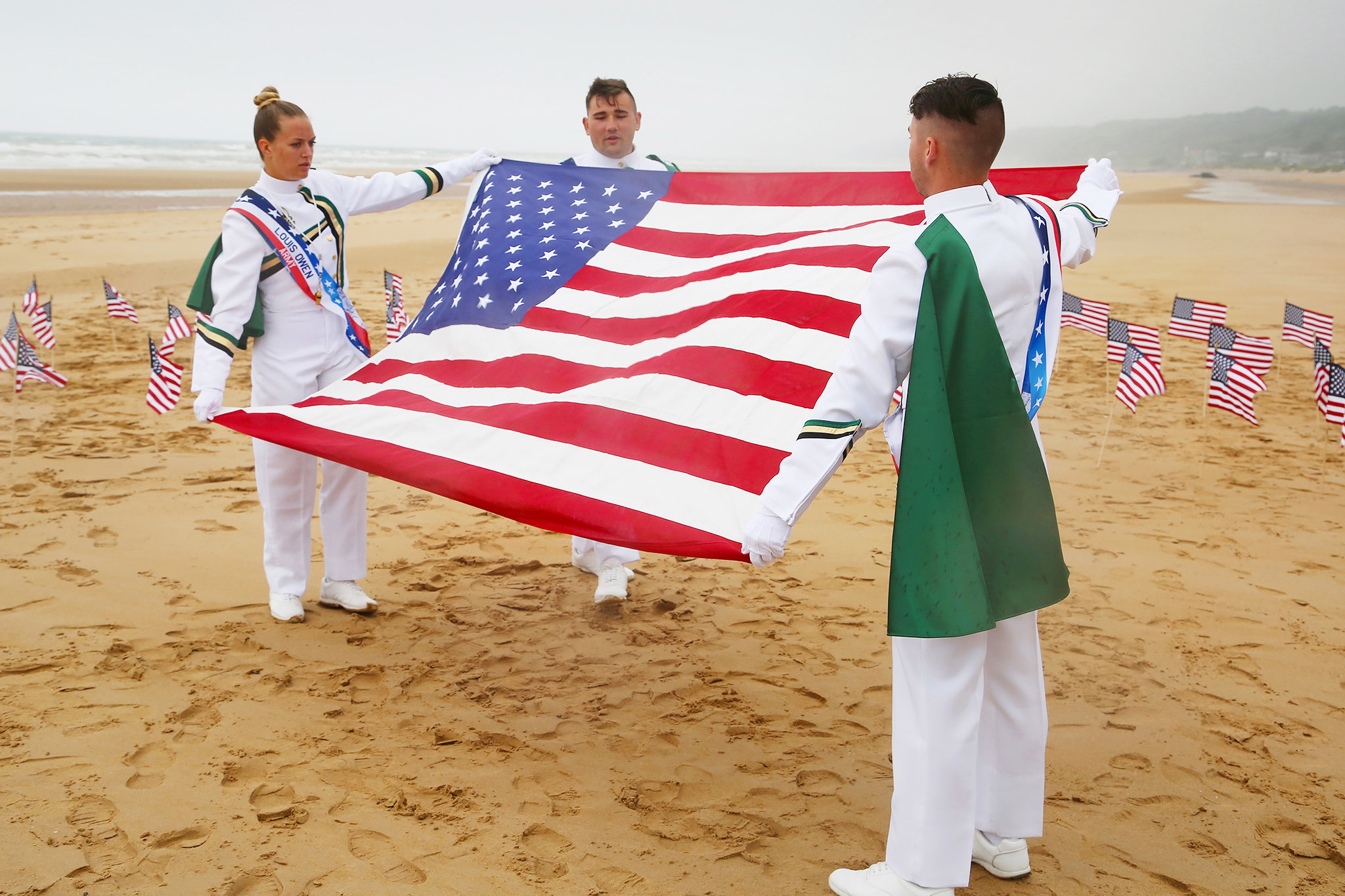 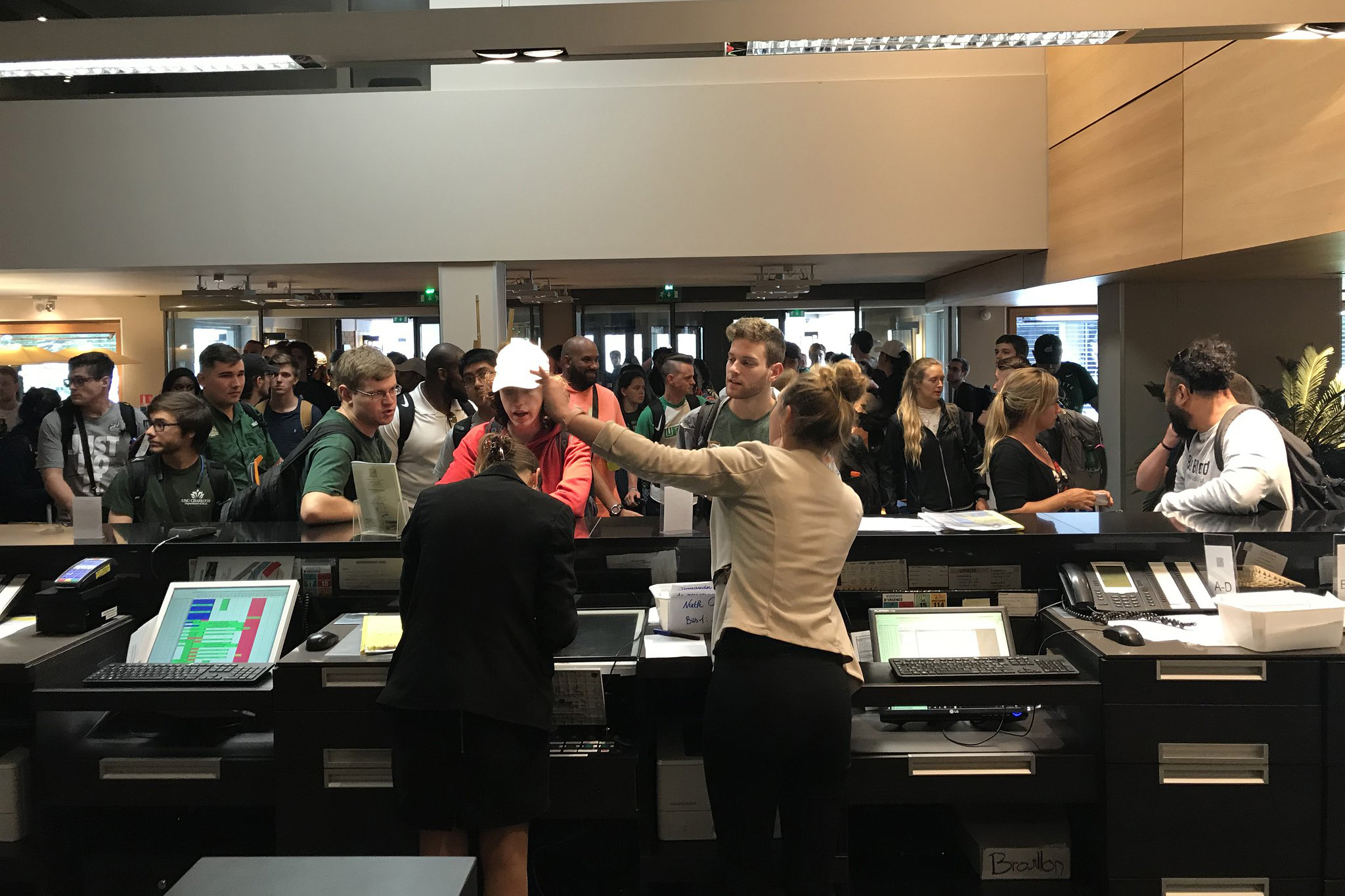 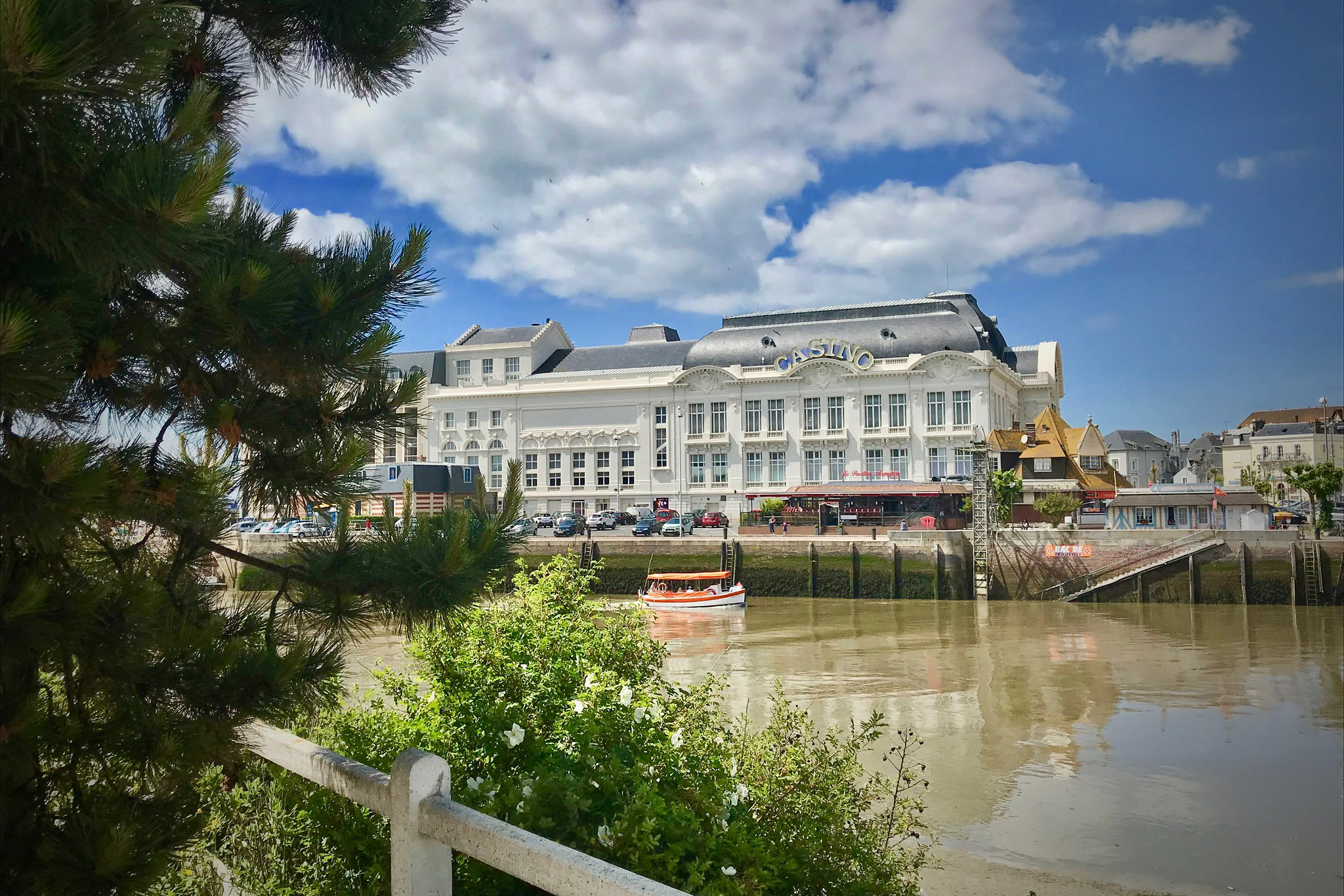 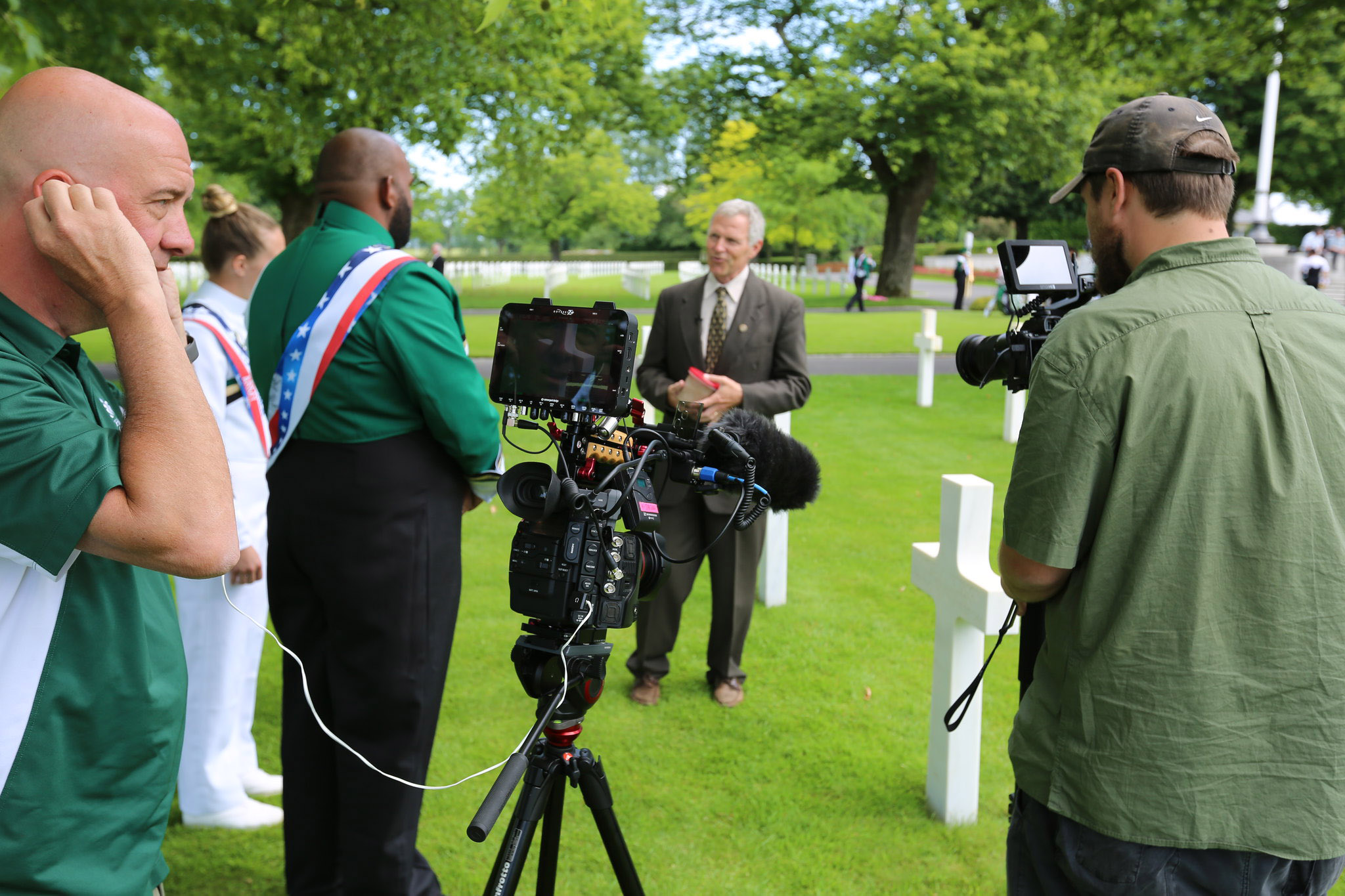 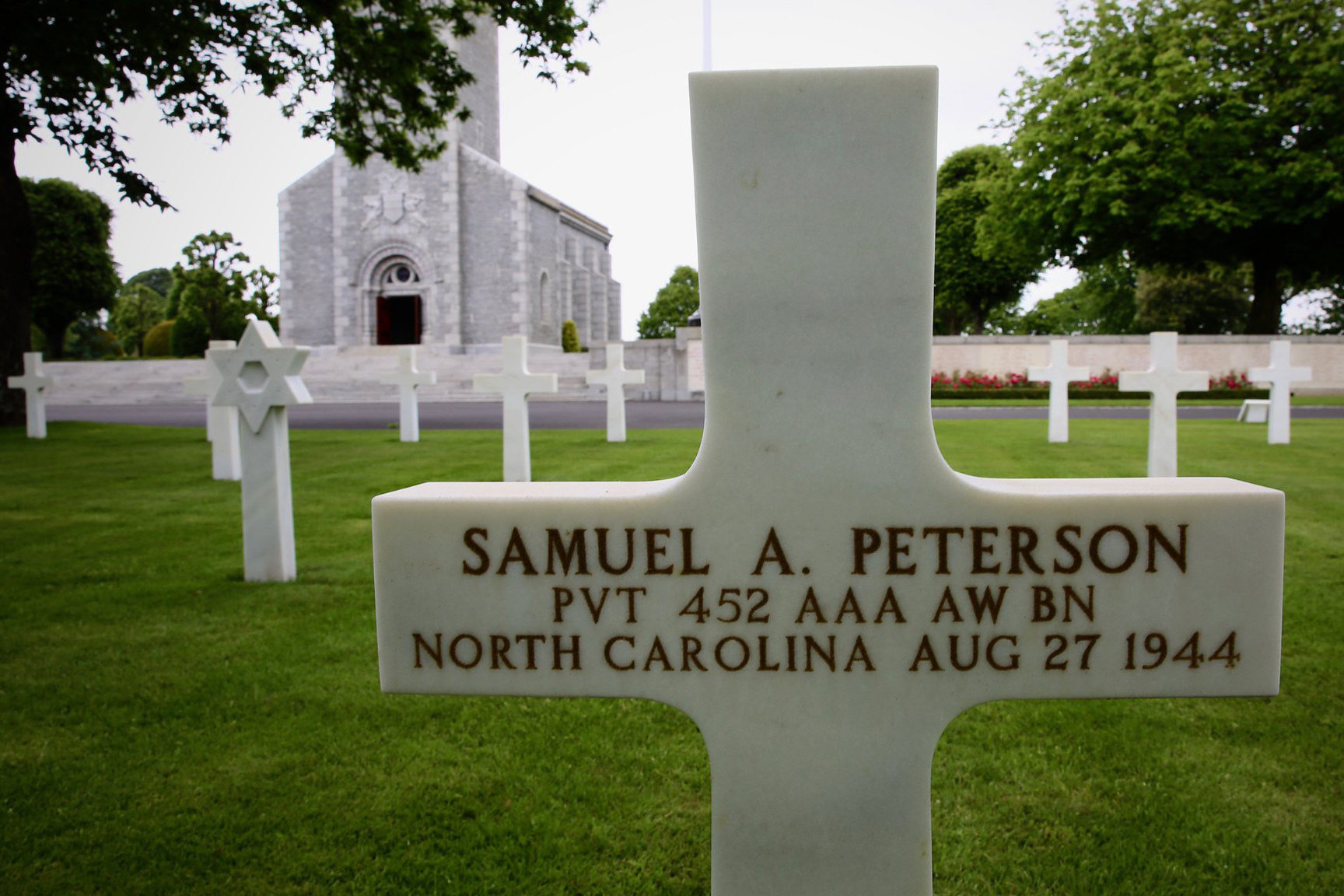 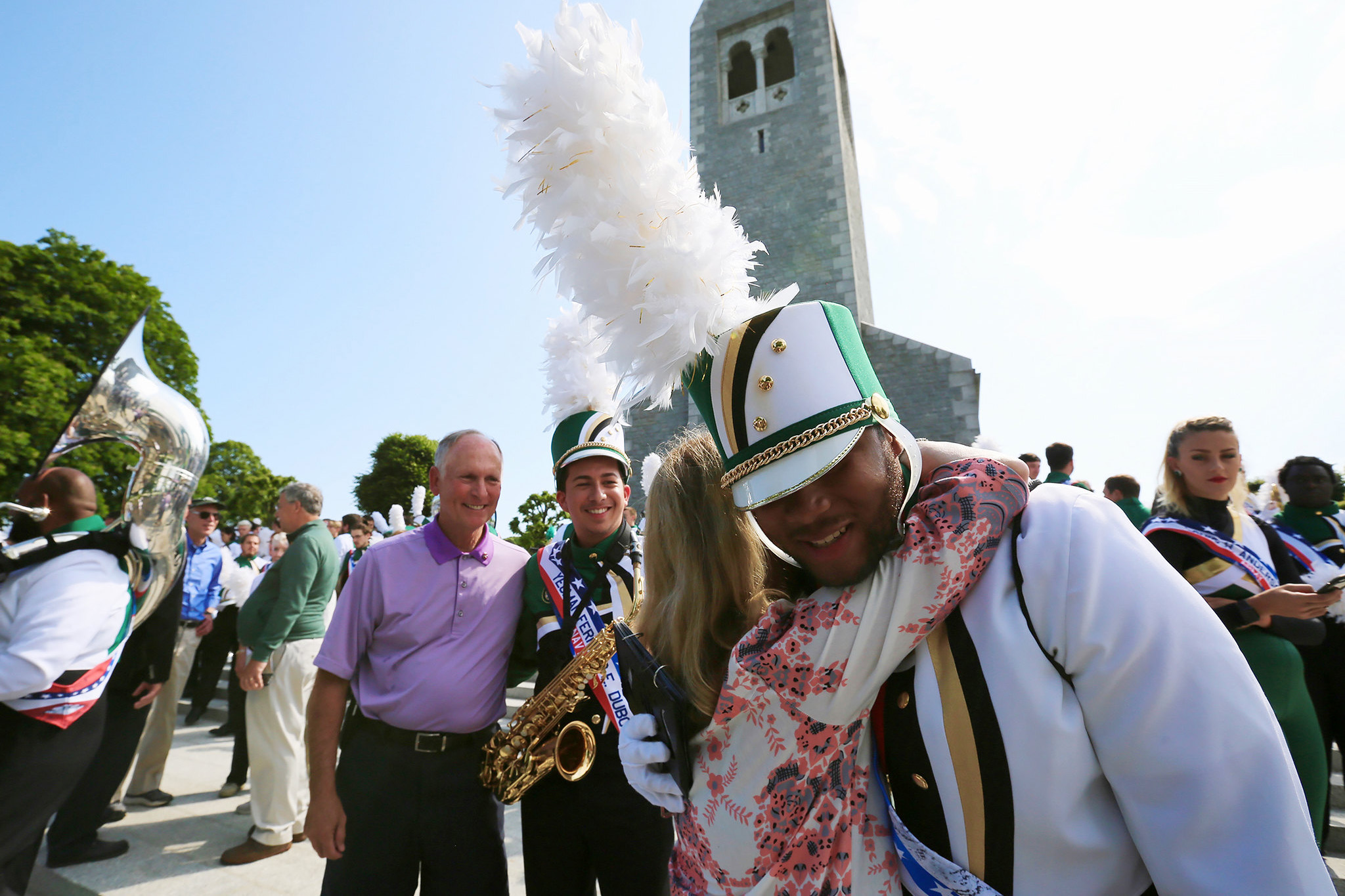 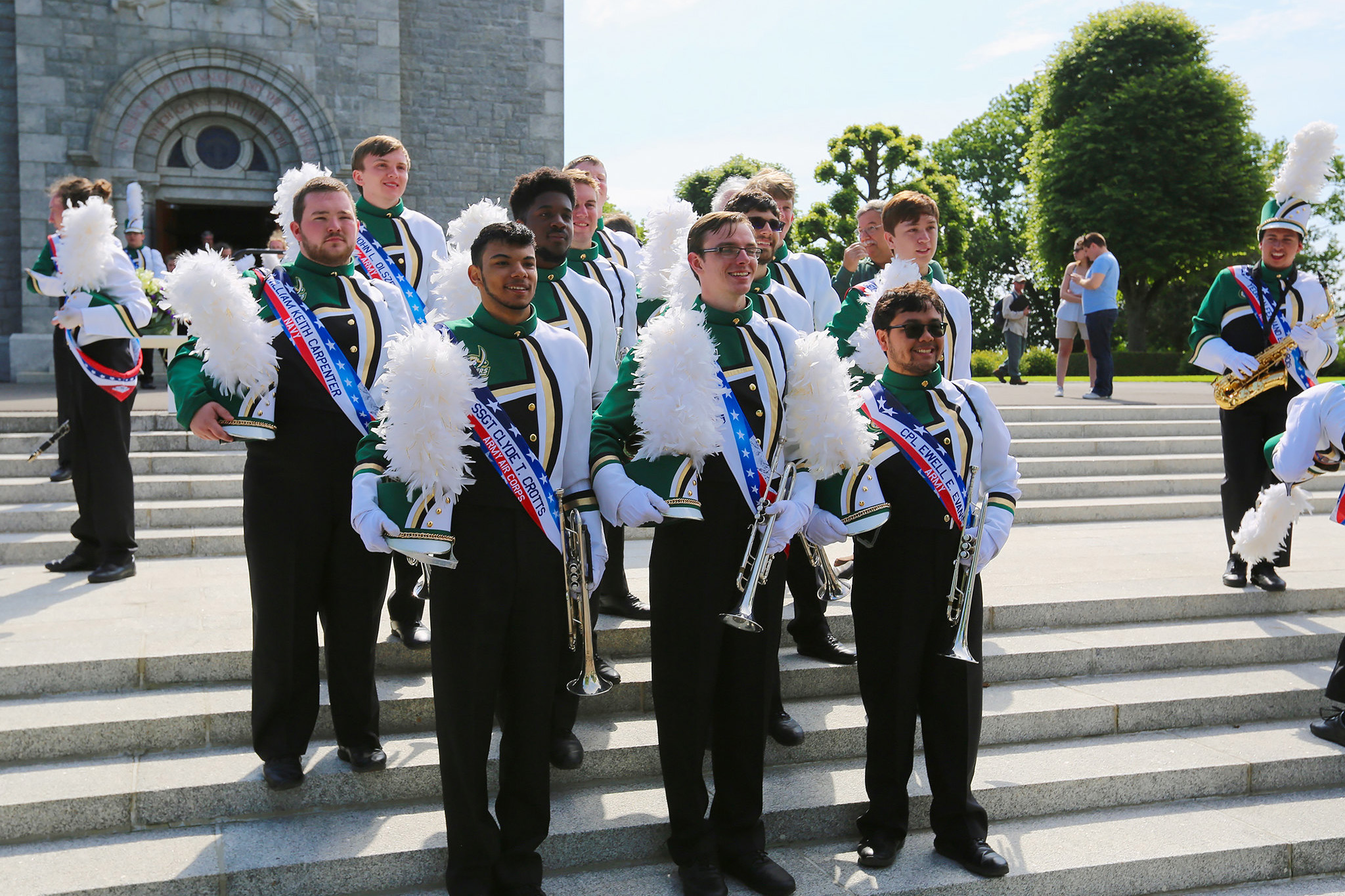 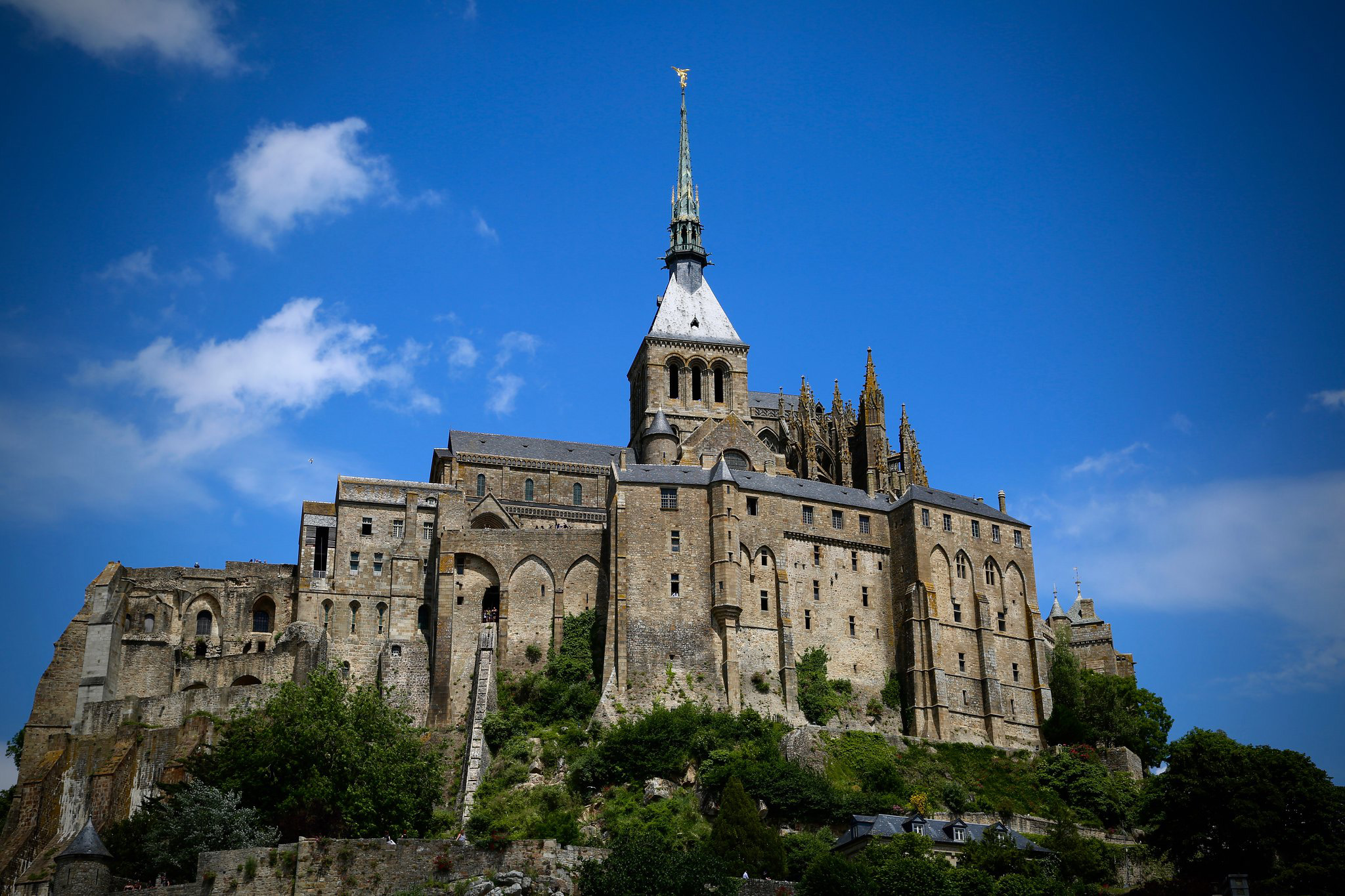 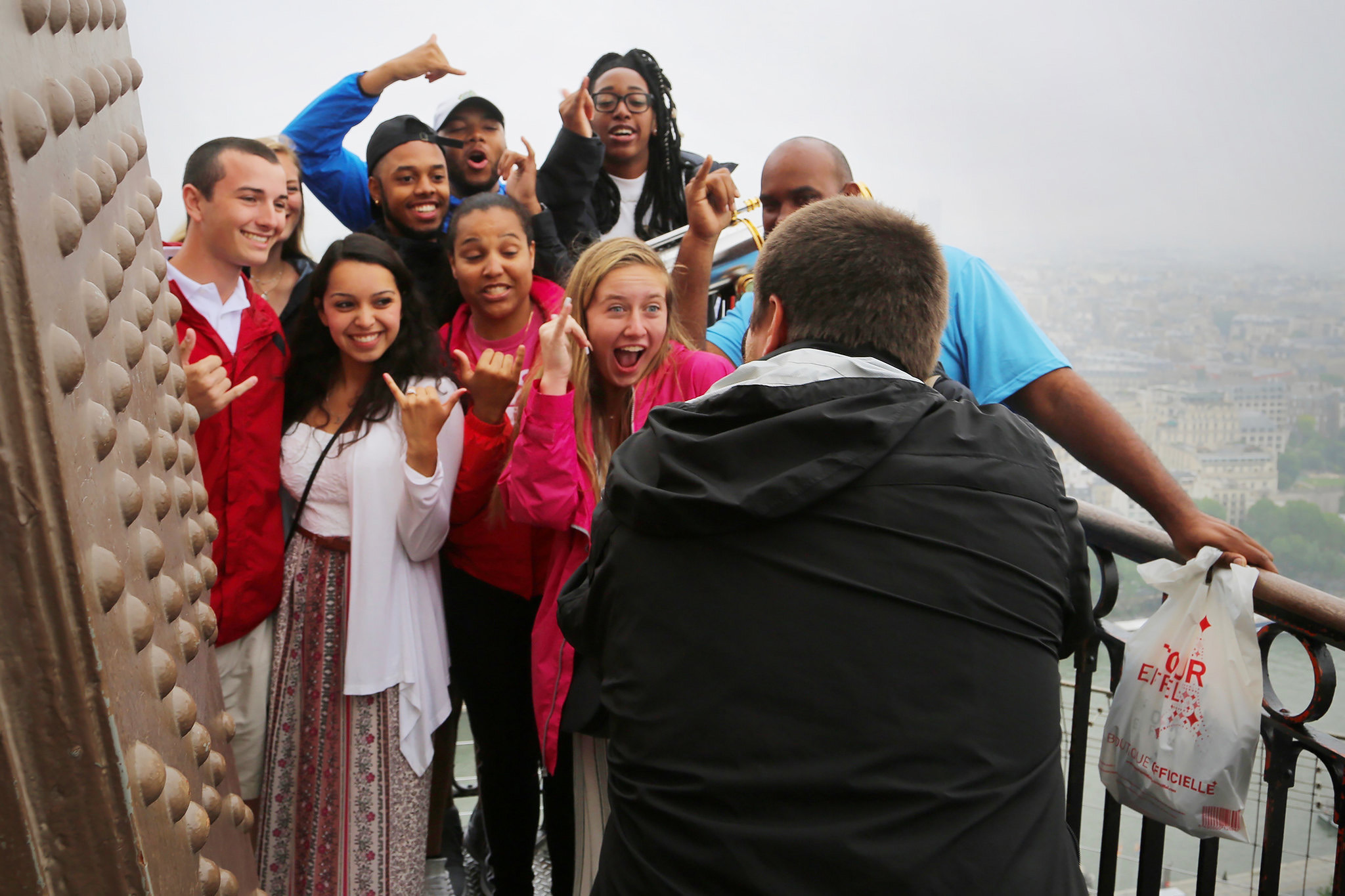 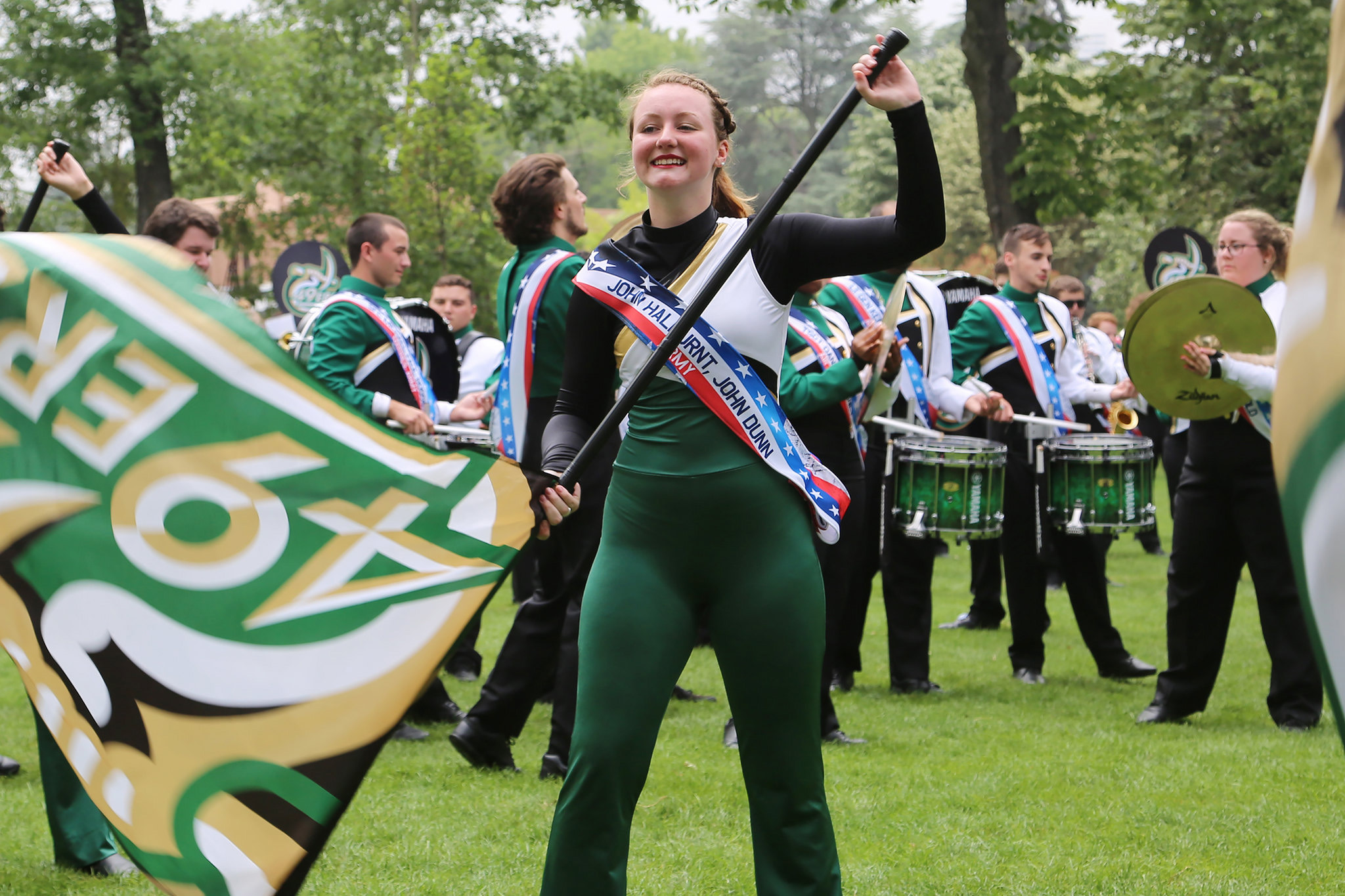 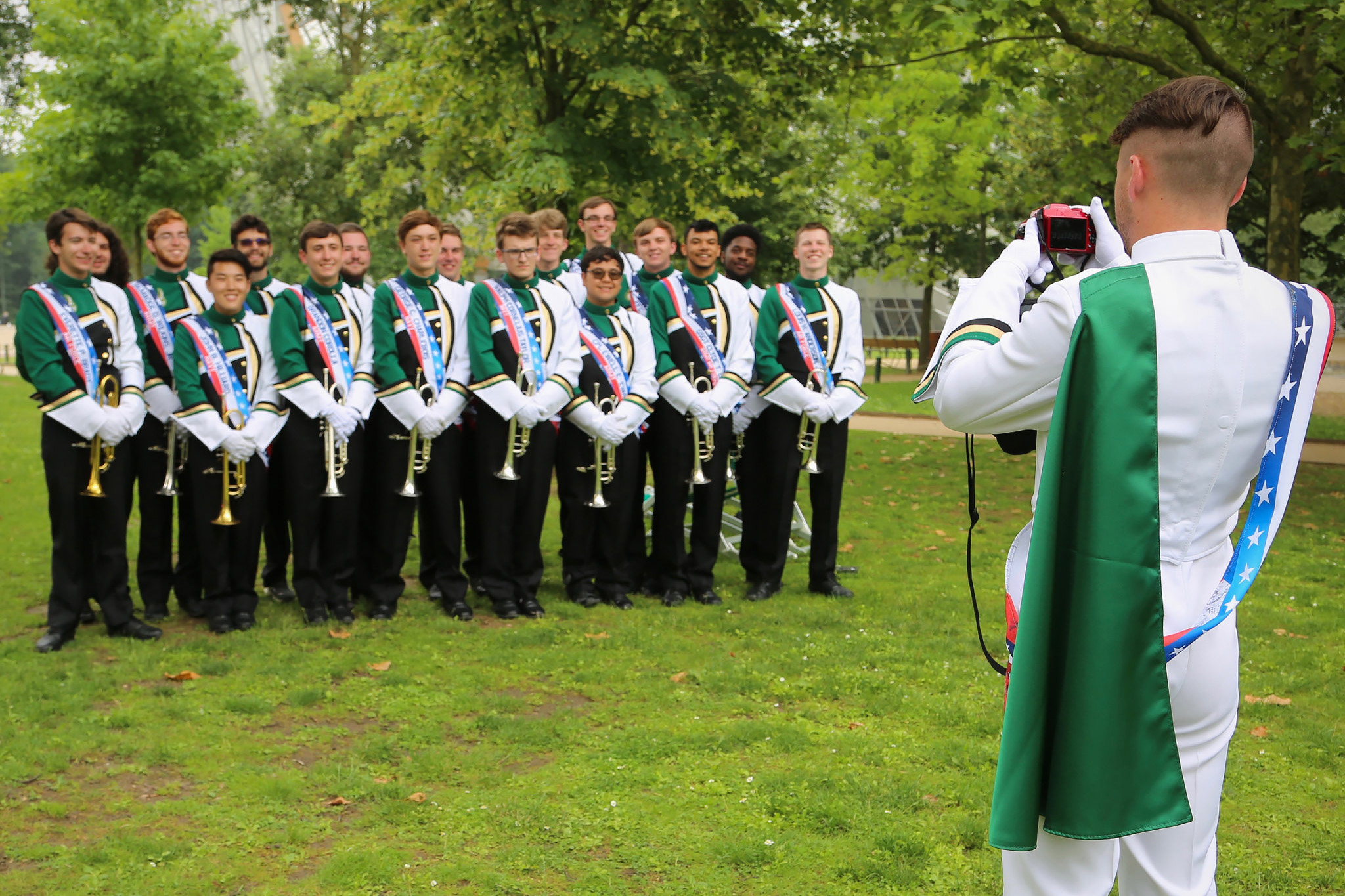 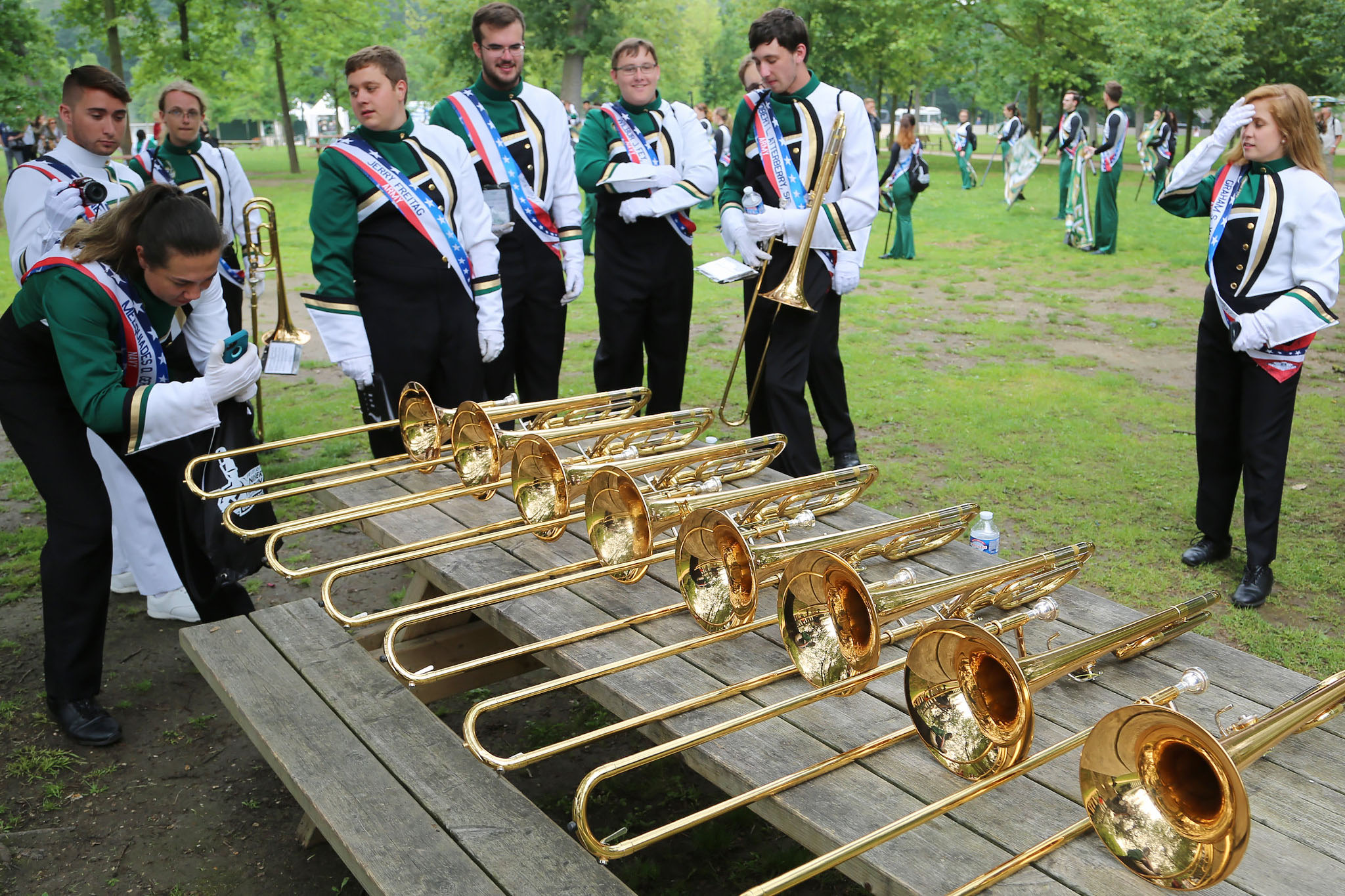 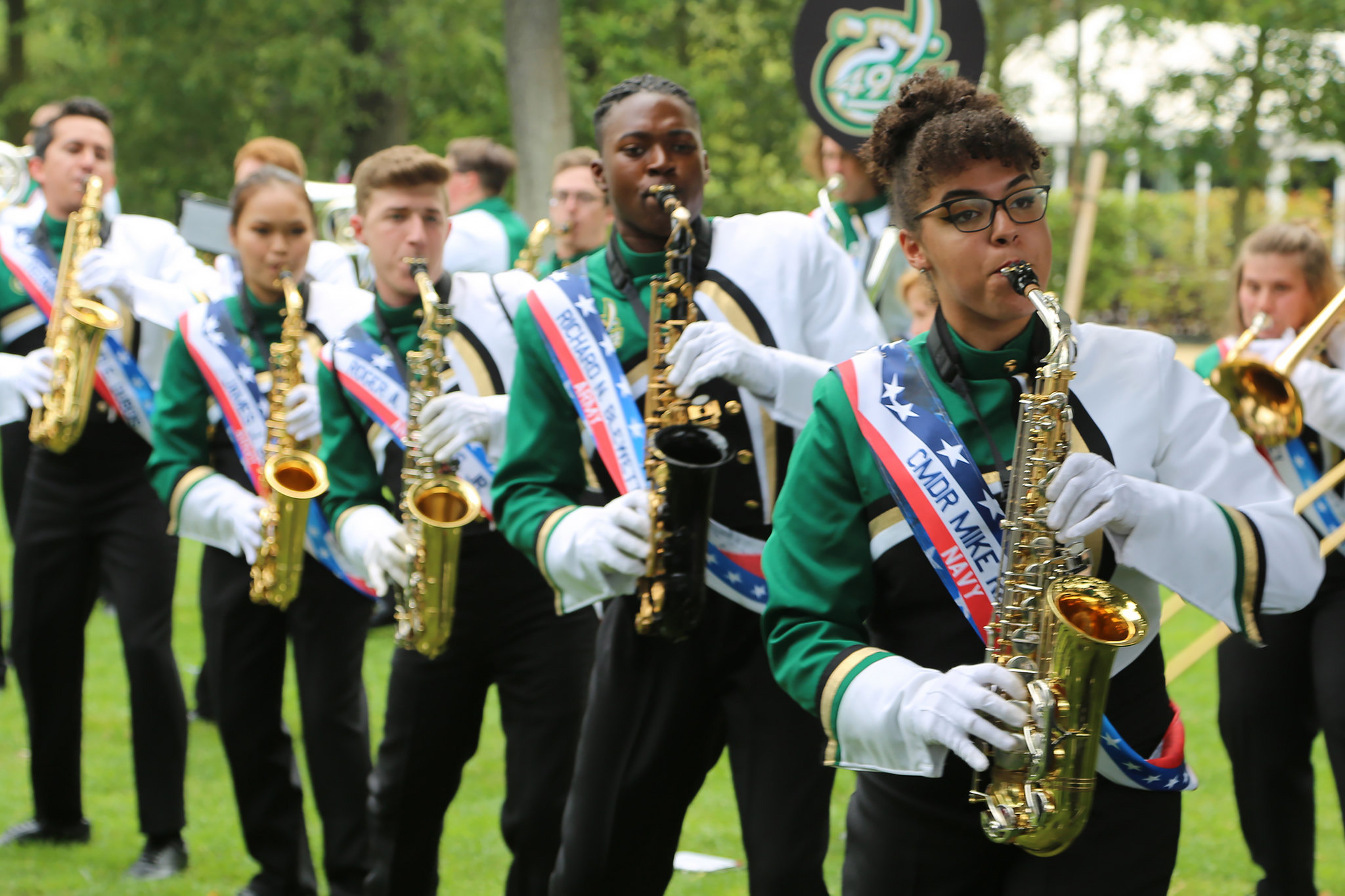 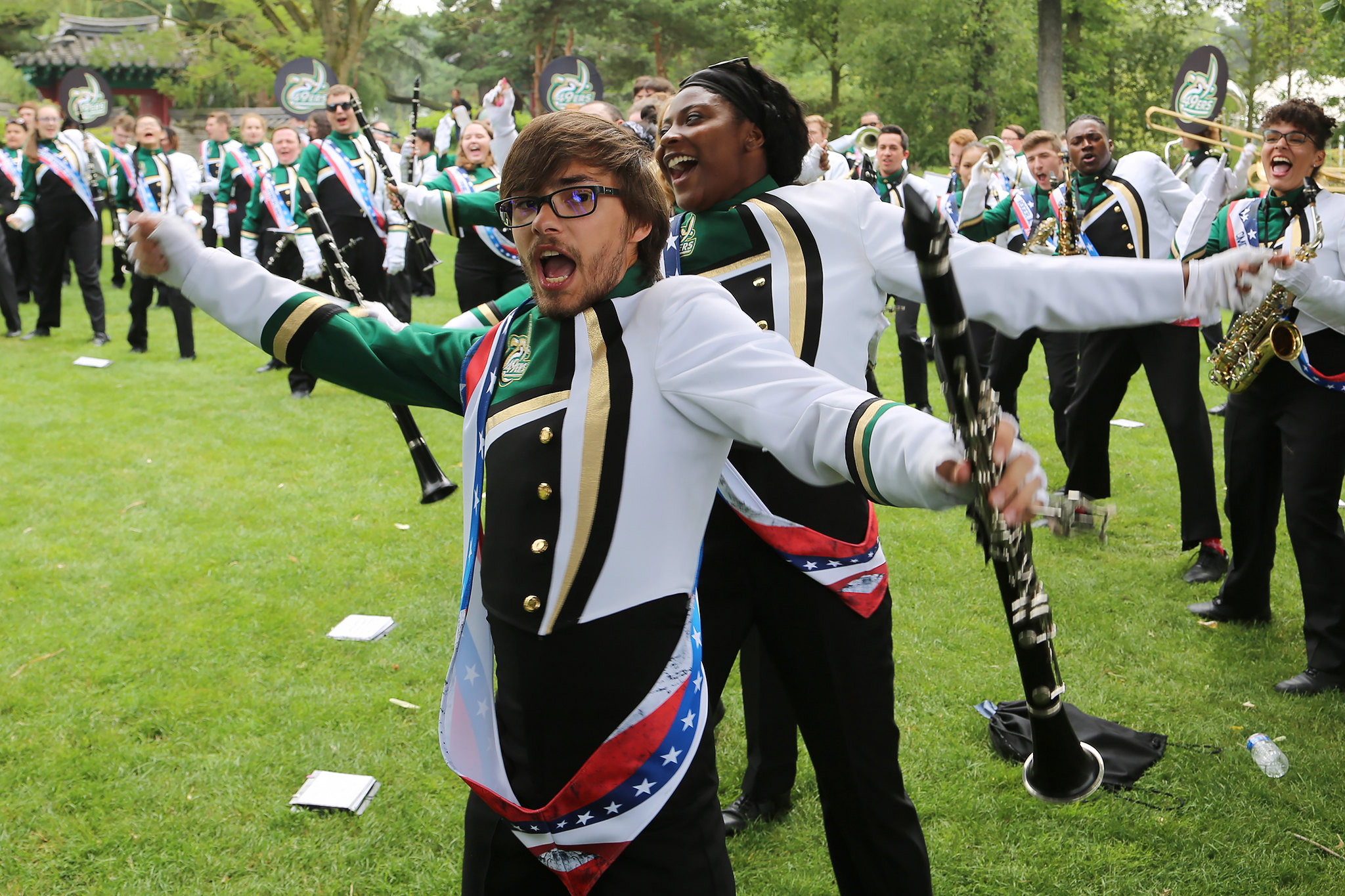 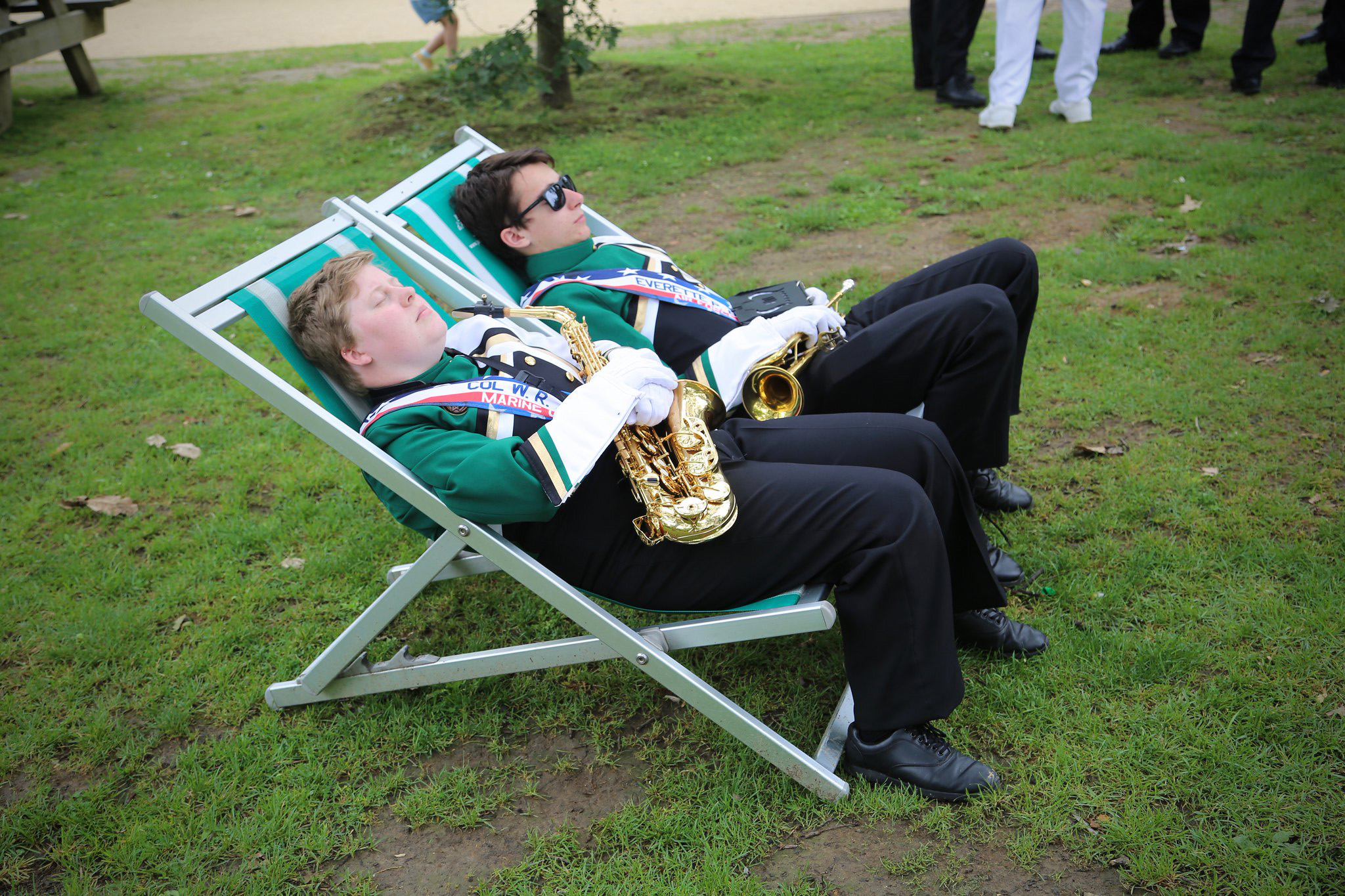 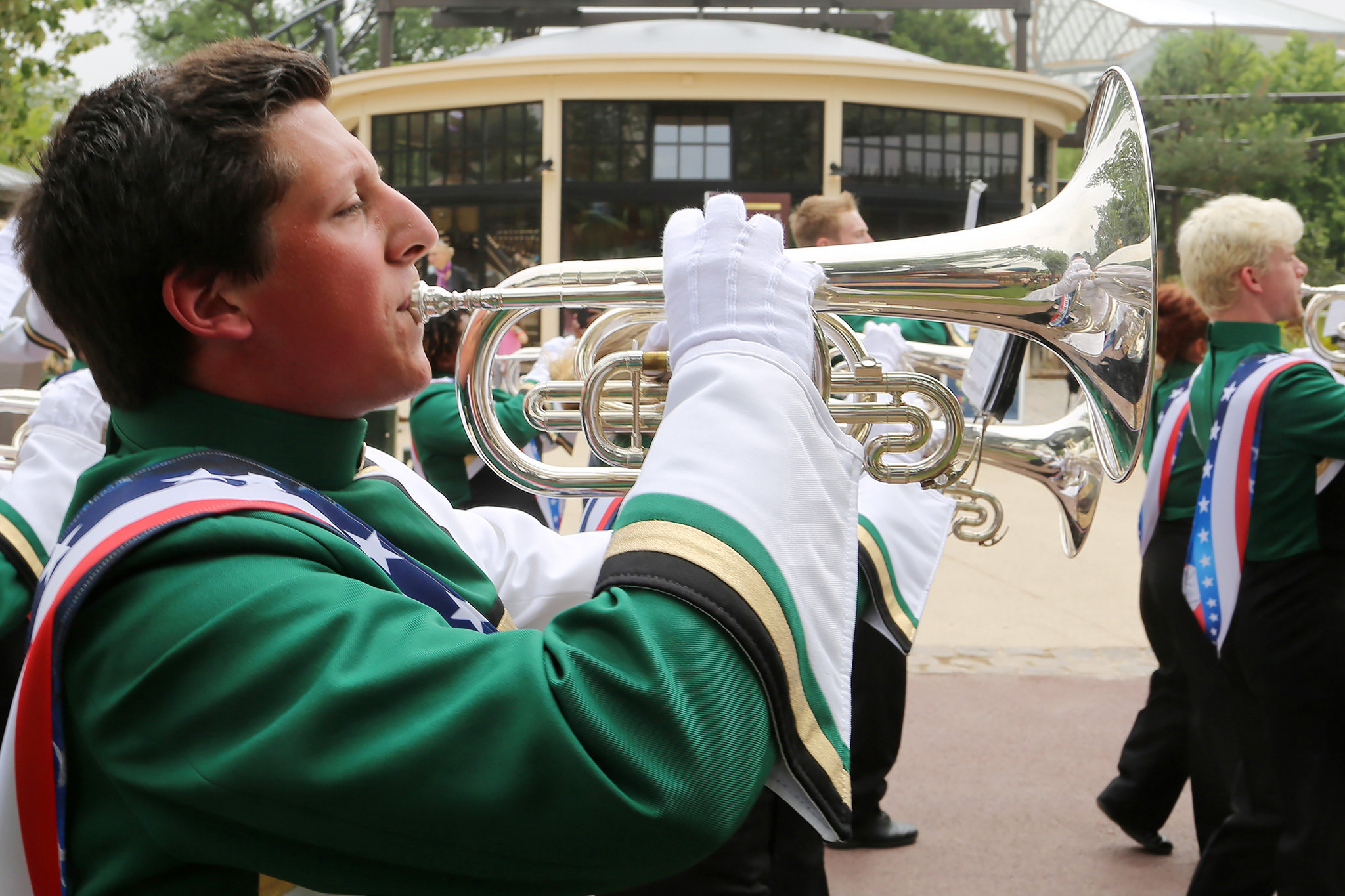 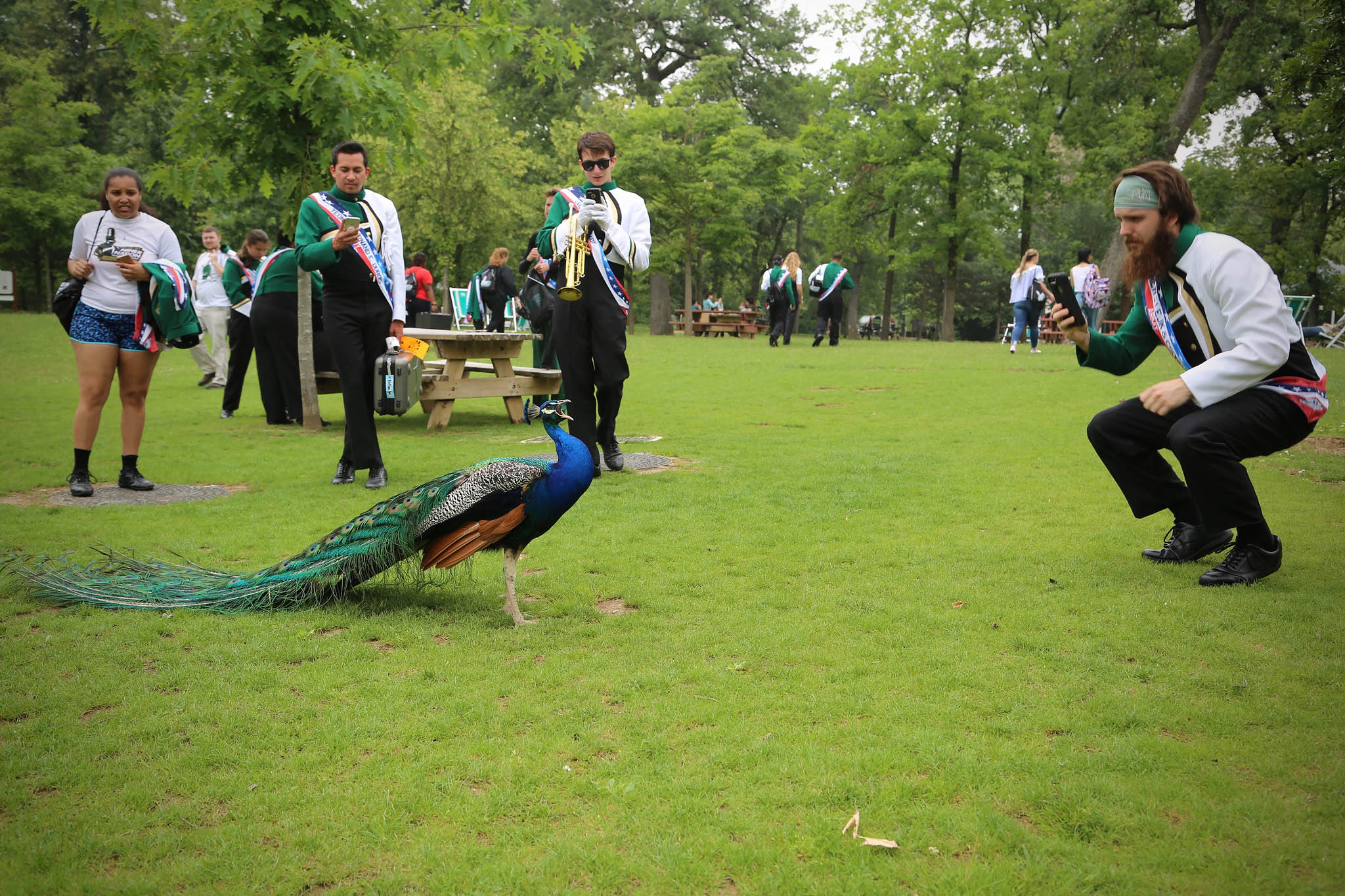 “It becomes something far more than an event to these students. It becomes a way for them to say ‘thank you’ to these young boys who never came home,” observed Earl Hurrey, a retired Marine master gunnery sergeant, former member of “The President’s Own” U.S. Marine Band, and an organizer of the annual, weeklong D-Day observance in France.

“I was touched by just how much this trip and the University’s participation meant to your students. It confirmed that I selected the right school to represent America at the 2018 D-Day ceremonies.”

MORE THAN SELF THEIR COUNTRY LOVED 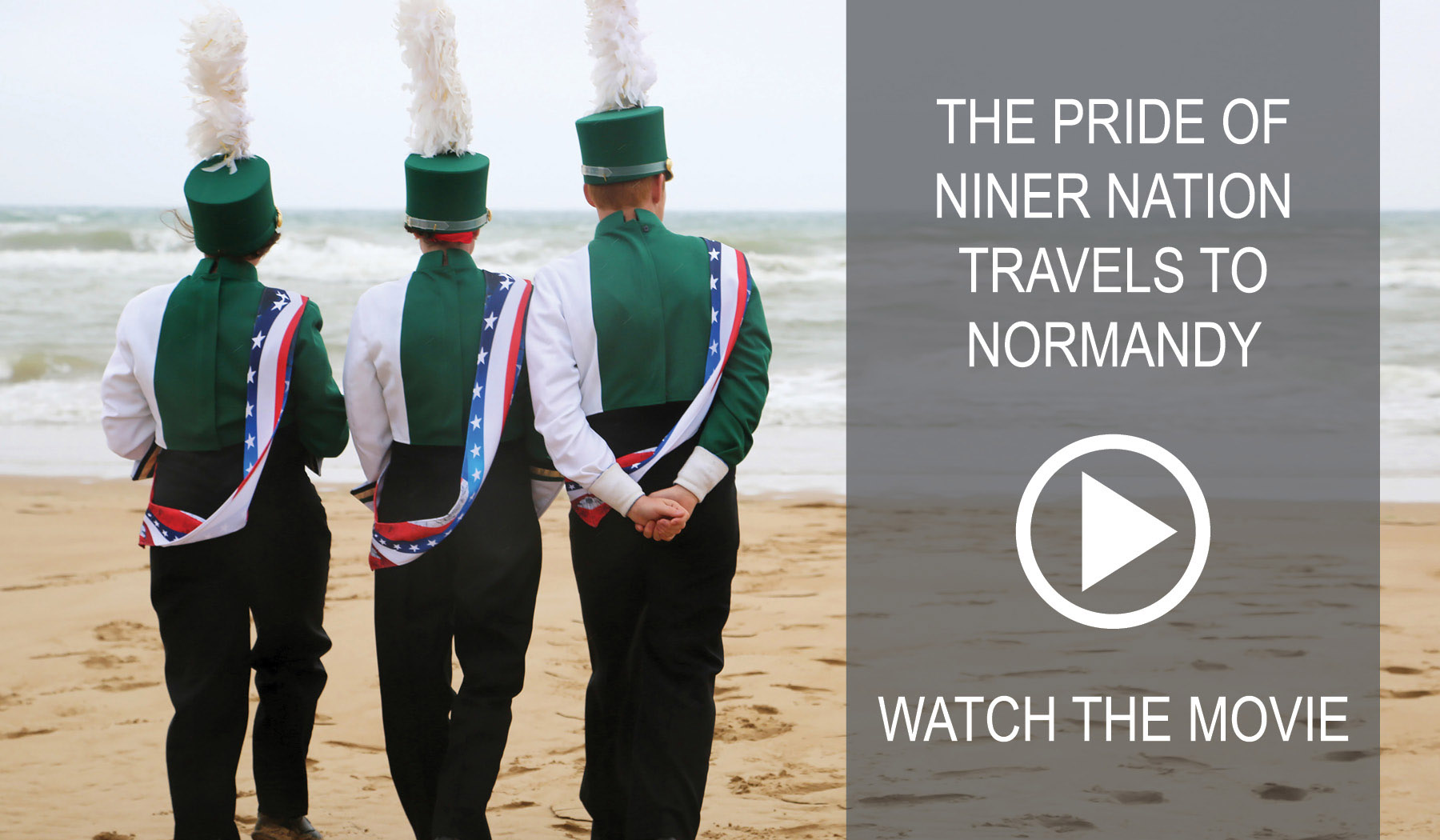 The band’s experience is captured in a cinematic documentary produced by University Communications. A UComm team in France gathered and uploaded stunning footage that was then produced by UComm in Charlotte and the program debuted on June 6. With nearly 40,000 views and counting, the video and its accompanying website tell not just the story of the band’s tour, but of the University itself. Titled Origins of Opportunity, the presentation connects D-Day, the turning point that set American sights upon life after war, to the birth of the school that would become UNC Charlotte. The project’s web site features 80 stories from across the University community of family members who served during World War II.

Highlights of the Origins of Opportunity documentary include performances by the band, a moving tribute to a Charlotte soldier buried in the Brittany American Cemetery, the cautionary story told by Holocaust survivor and Professor Emerita Susan Cernyak-Spatz, and beautiful scenery from the Normandy coast. 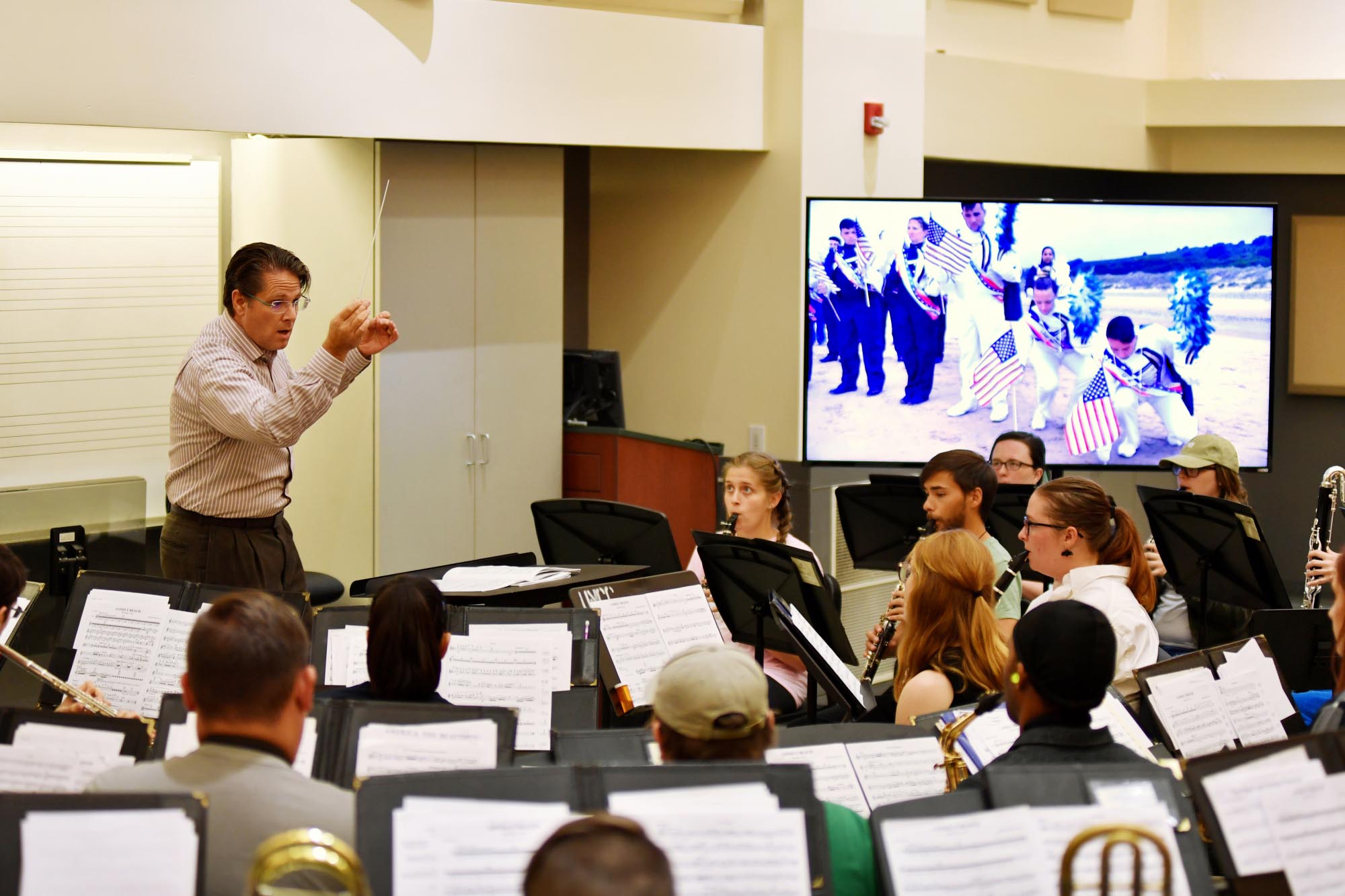 The Music Department’s multi-ensemble Veterans Day concert in Charlotte’s Ovens Auditorium, featuring the marching band, wind ensemble and chorale will revisit the late-spring experience in France. Three war-themed selections will be accompanied, on a theater screen, by footage from the Normandy tour, including many scenes not seen in the documentary.

For alumni donors Vickie and Gene Johnson, who were major supporters of the Normandy trip, the concert will be another crowning touch.

“Our experience with the marching band is perhaps the most meaningful of all because it enables students to do something they truly love and it unites the University in ways that few things do. The Normandy experience is an amazing example of that,” Gene Johnson noted.

That sense of unity was felt across campus this summer. Within the Business Affairs Division, for instance, several staff groups held Origins of Opportunity viewing parties.

“The video confirmed as well as expanded my knowledge of our history as a university, and Ms. Bonnie Cone, our founder, seeing the need for our veterans to get a college education,” said Karen Worthy, a staff member in the Controller’s Office.

“My grandfather was in the war but I did not have the understanding that the video brought to my attention. I actually needed tissues because it was rather emotional,” she added.

SEES BEYOND THE YEARS

Fall semester put the band back on home turf adding to the excitement of 49ers football games. For members who made the trip to France, the memories have staying power.

“When I talk about the trip to Normandy, 20 or 30 years from now, I know that I will talk about walking on Omaha Beach, meeting General Patton’s granddaughter, meeting veterans and hearing their stories after performing for them in St. Mère Église, and planting flags for the fallen on Omaha Beach. I did also get to see the Eiffel tower and go into the Louvre, but none of that carries the significance of what I was able to do to try to honor those who fought for not only myself and America, but the world, making it what it is today.”