Get to know Jennifer Troyer

Get to KNow Jennifer Troyer

Get to know Jennifer Troyer 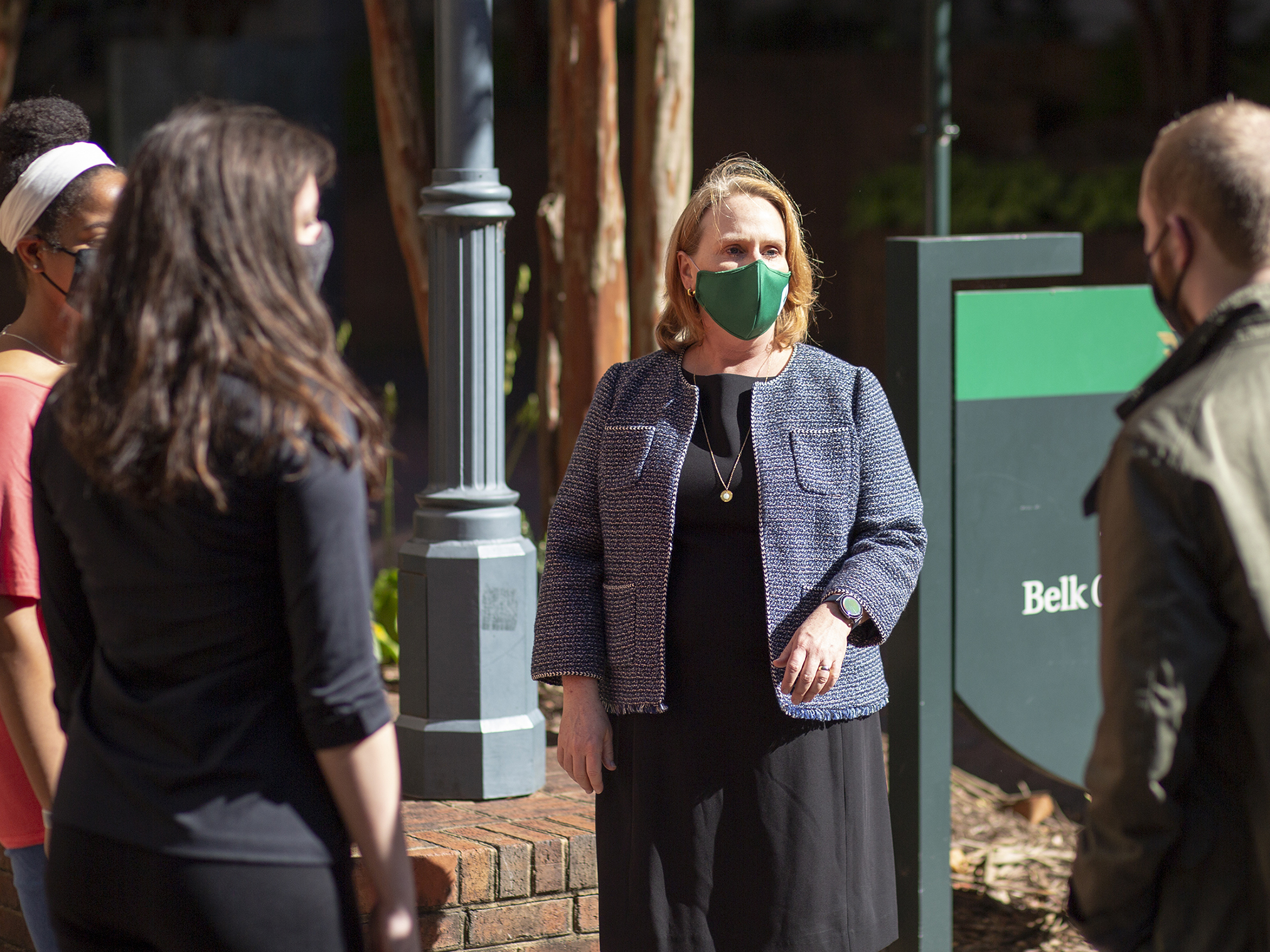 A leading national researcher on health economics, Jennifer Troyer became dean of UNC Charlotte’s Belk College of Business in July 2020 in the midst of a global pandemic. Her immediate concern was to ensure the health and safety of the college’s students, faculty and staff.

The pandemic has not deterred Troyer from her goal to connect the greater Charlotte business community with the college’s alumni network. Novel approaches for those connections include a podcast series, an e-newsletter and virtual events. She is guiding Belk College’s yearlong 50th anniversary celebration, which continues through April 2021 with events such as the Dean’s Leadership Series. And she is focused on the college’s future, with the development of a new strategic plan, which will be informed by ongoing discussions with Charlotte’s business leaders and Belk College faculty, students and alumni.

The seventh dean of UNC Charlotte’s Belk College of Business, Troyer actually is a veteran faculty member, joining the University two decades ago after completing rigorous master’s and Ph.D. programs at Florida State University. Her desire to join UNC Charlotte was rooted in the University’s history as a pioneering institution that affords students and faculty opportunities to excel.

“For five decades, the Belk College of Business has been a leader in Charlotte, offering innovative programs that have provided the talent pipeline vital for business and industry growth, not only in the Queen City but across the greater Charlotte region,” said Troyer. “We’re among the largest and most diverse business schools in the Carolinas — and poised to become one of the nation’s top urban research business schools. We’ll do so by building on the college’s deep partnerships with Charlotte’s corporate and business communities.” 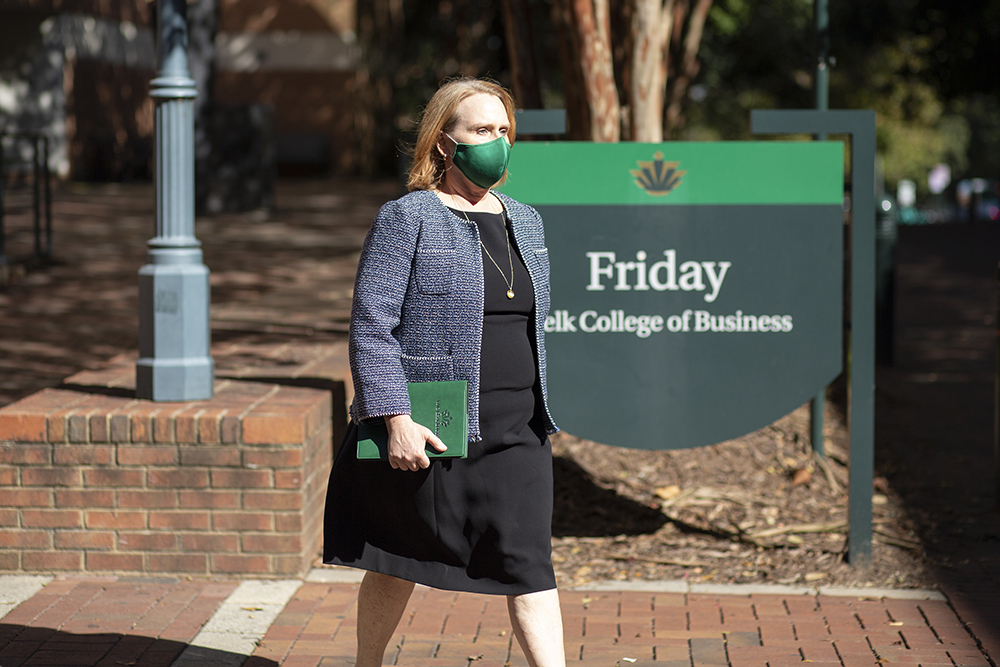 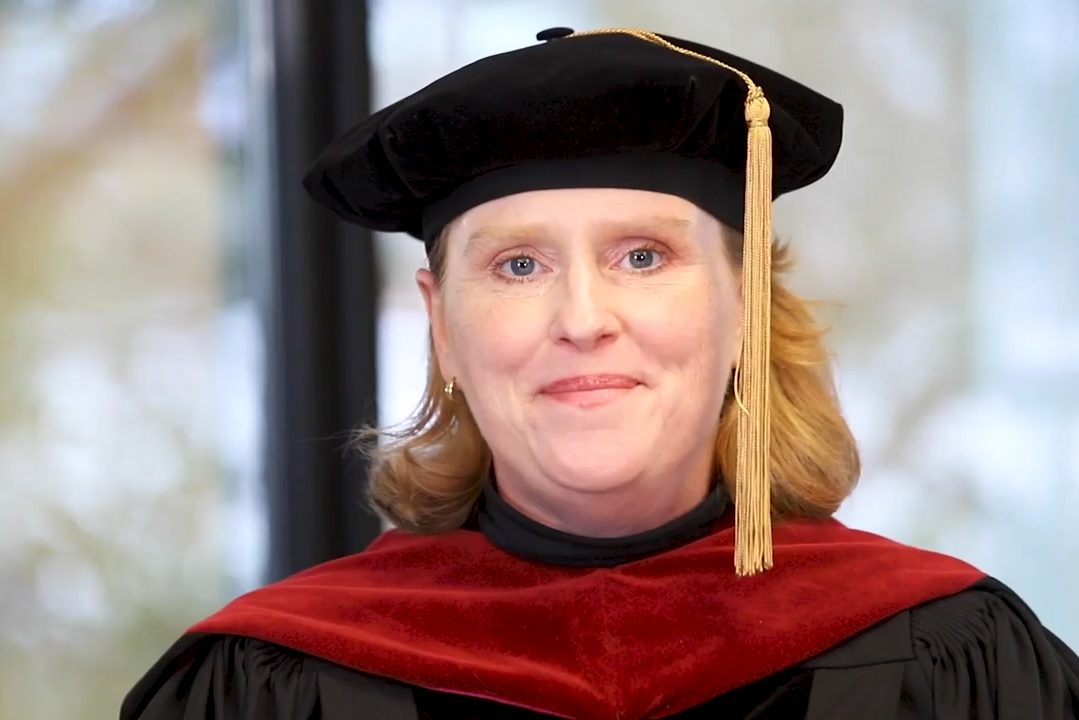 Interdisciplinary leadership is a hallmark of Troyer’s career, which started with a joint appointment between the Economics Department and the Master of Health Administration program. An award-winning health economist, she has initiated policy-relevant studies on the quality of U.S. nursing homes, investigated the cost-effectiveness of medical interventions and analyzed strategic behaviors in the pharmaceutical industry. Her research has received funding from a number of state and federal agencies, including the National Institutes of Health.

Prior to serving the Belk College as interim dean, Troyer was interim dean of the College of Health and Human Services, where she raised more than $500,000 in private funding and helped foster and grow an annual commitment from Mecklenburg Public Health. As Belk College associate dean, she was instrumental in the creation of three graduate certificates and the Master of Science in Management (MSM) program. She also helped launch the first Doctorate in Business Administration (DBA) program in the Carolinas in 2017.

“Business Niners are doers. We aren’t afraid of hard work or to take calculated risks. We are resilient and persevere in the face of difficult circumstances.”

A first-generation college student who attended the University of Memphis, Troyer knows from experience the challenges that many Belk College undergraduates face. As student enrollment has increased more than 30 percent during the past decade, the college has focused efforts on helping students succeed.

“The Niblock Student Center offers a one-stop support hub for our students,” said Troyer of the supportive programming made possible by a generous gift from alumnus and retired CEO and chairman of Lowe’s Companies Robert Niblock. “During this past academic year, more than 2,800 students attended professional development programs, support that led to  90 percent of 2019 graduates landing full-time employment or pursuing graduate studies.” 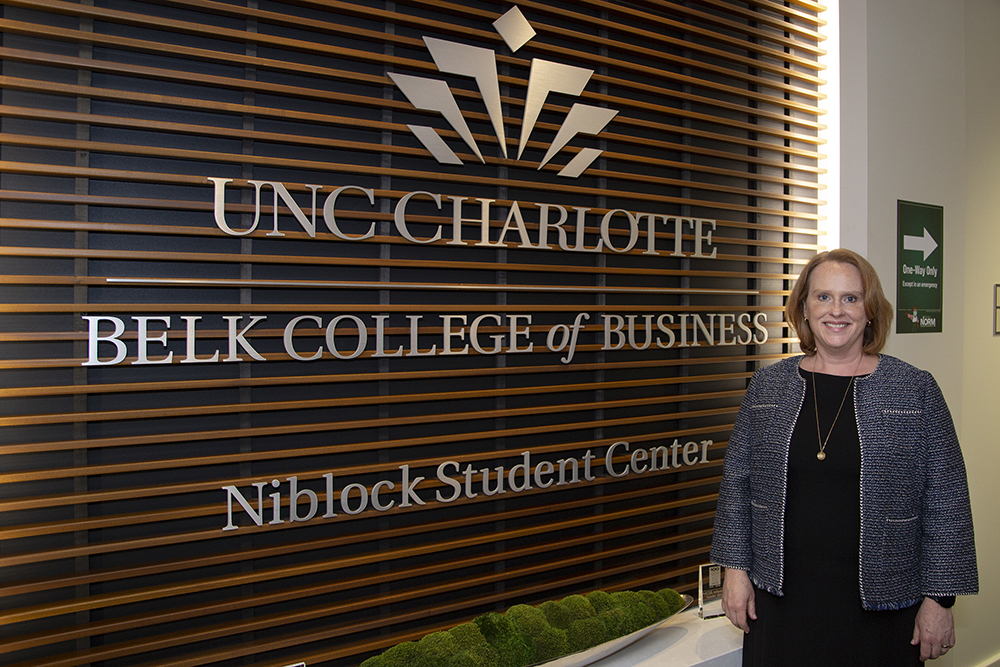 “The Belk College of Business has a cadre of talented teachers and researchers from around the world, who are at the forefront of addressing pressing problems in business and society. We work across disciplines and colleges to provide our graduates with the knowledge and skills to succeed in an ever-changing workplace.” 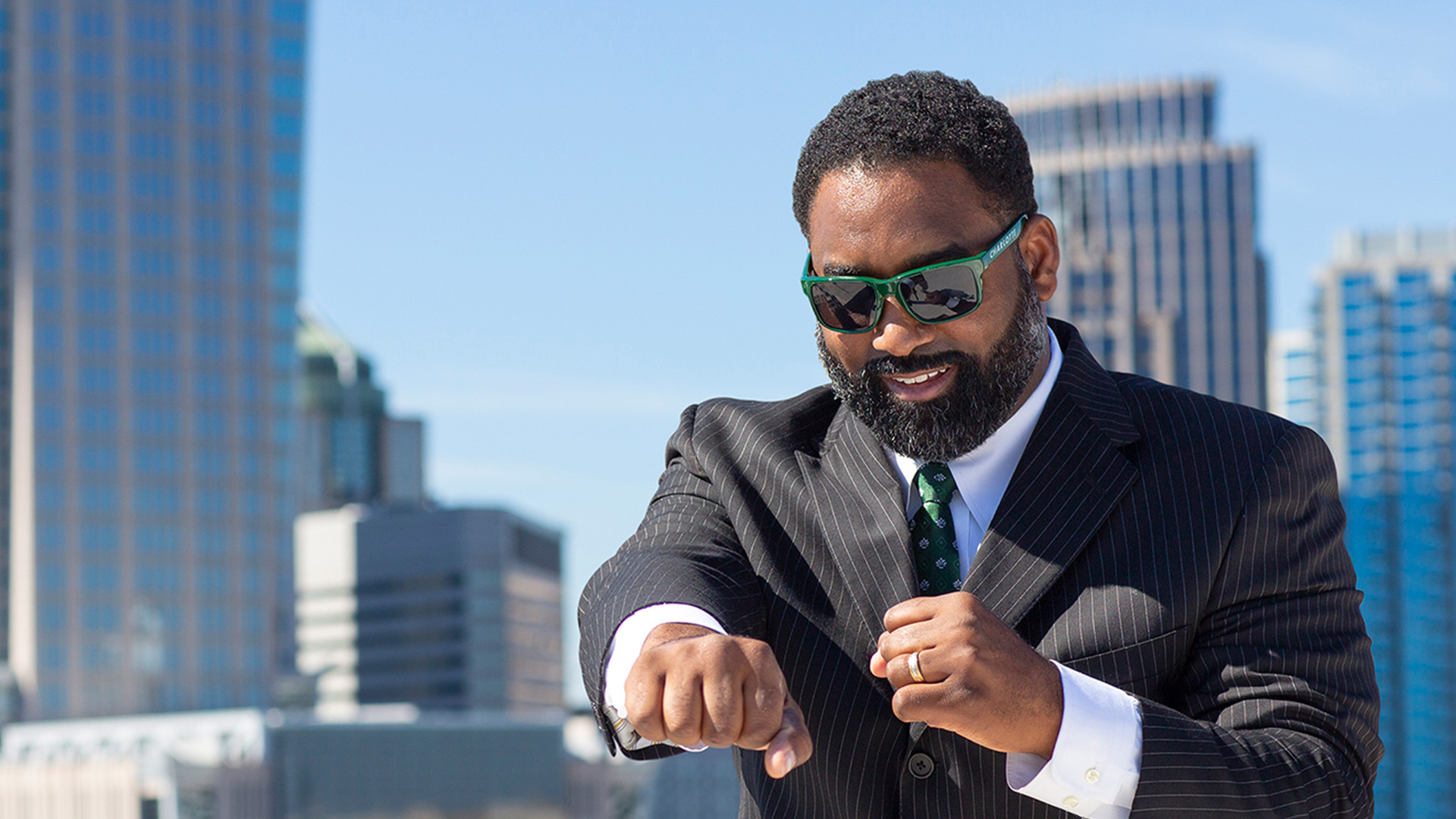 Boxing and business—dual passions that have fueled Calvin Brock’s life. The entrepreneurially minded pugilist knew from an early age that one day, he would compete for a world’s championship, and he would come to appreciate the lessons learned along the way, especially from UNC Charlotte’s Belk College of Business.

Brock’s dream began one Christmas morning. A typical 8-year-old, he excitedly opened a gift from his uncle. As he ripped away the wrapping paper, he discovered two pairs of boxing gloves.

“I couldn’t figure out why he gave me two pairs, because my sister was my only sibling, and back then, girls didn’t train to box,” said Brock, a 1999 Belk College alumnus. “But with the gloves, I started boxing with kids in the neighborhood, and I loved it. I begged and begged my parents to let me start training, and they finally relented when I was 10. But the trainer at the gym said to come back when I was 12.” 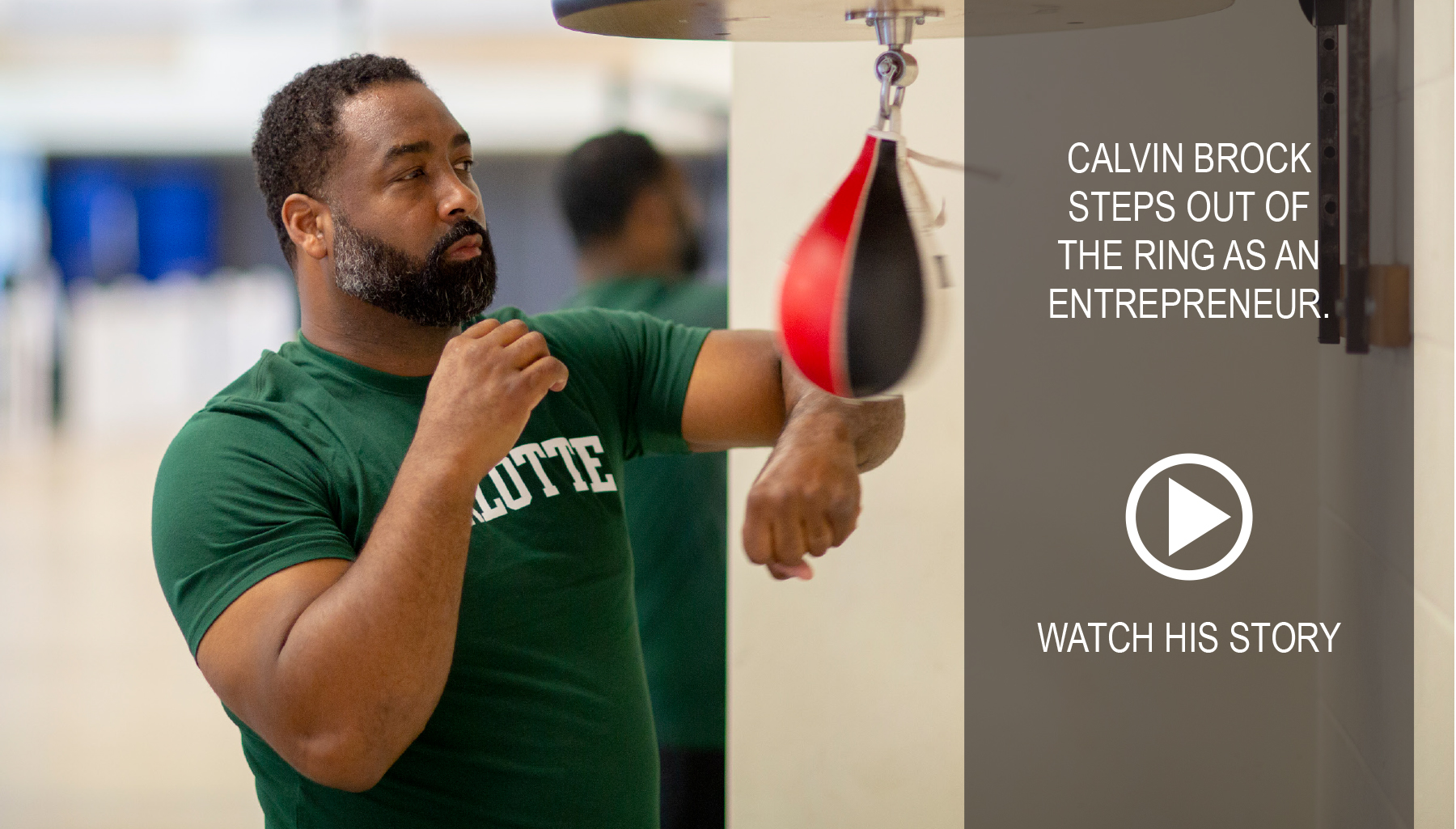 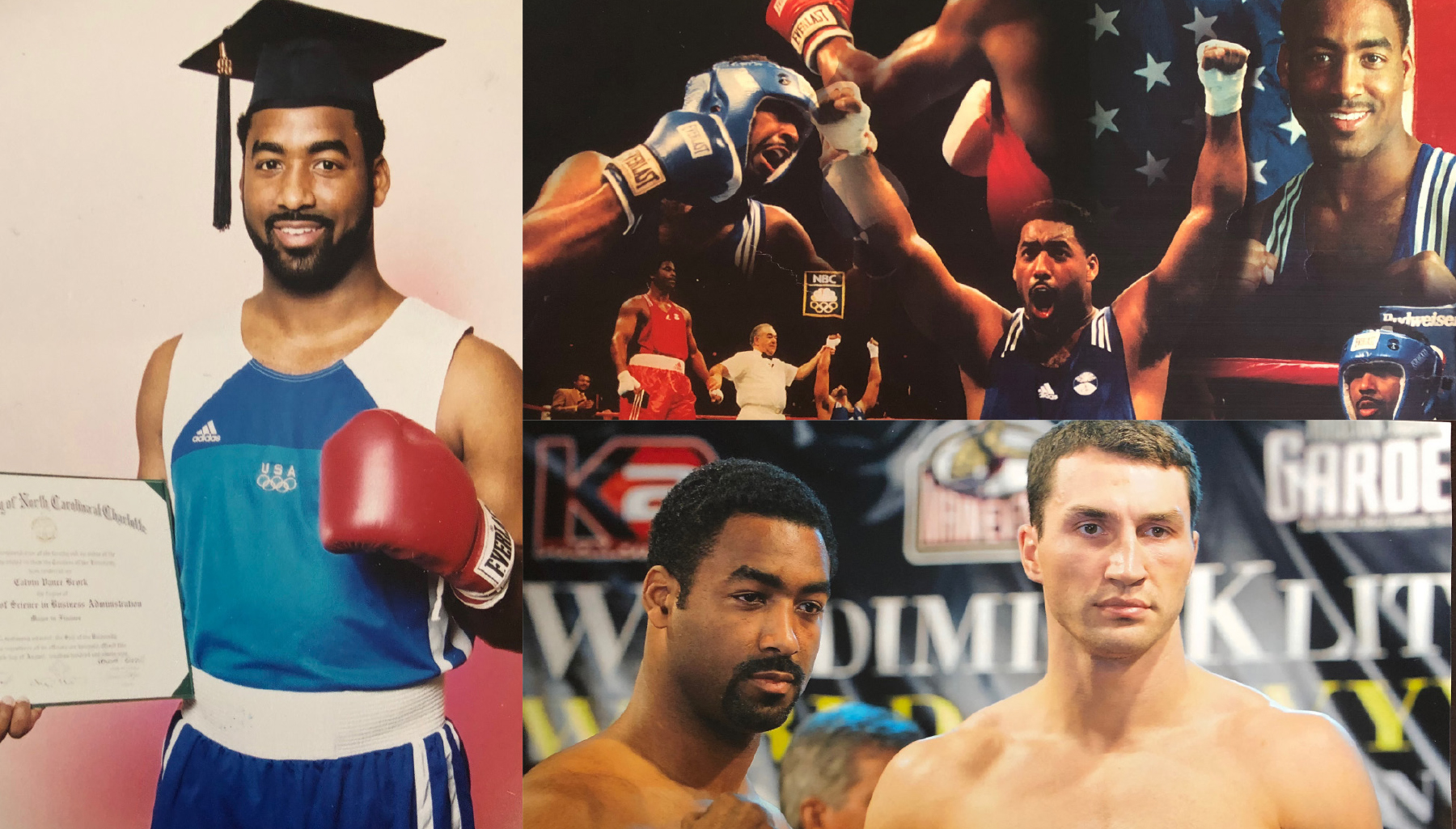 And return he did. He began with the North Charlotte Boxing Club (now the Charlotte Boxing Academy) and also trained with the Police Athletic League. The young fighter struggled, losing his first four contests, and just when he thought he would have to leave Charlotte to train, his father stepped in.

“I started going on winning streaks, winning second place in the National Junior Olympics at age 15, which ranked me the No. 2 amateur boxer in the country,” said Brock, who continued to compile titles statewide and nationally, including the Silver Gloves. He would win the national Golden Gloves Heavyweight Championship in 1998. As a senior at West Charlotte High School, Brock vied for the 1992 U.S. Olympic team; it would take eight years, but he won a spot on the 2000 squad and competed in Sydney, Australia. 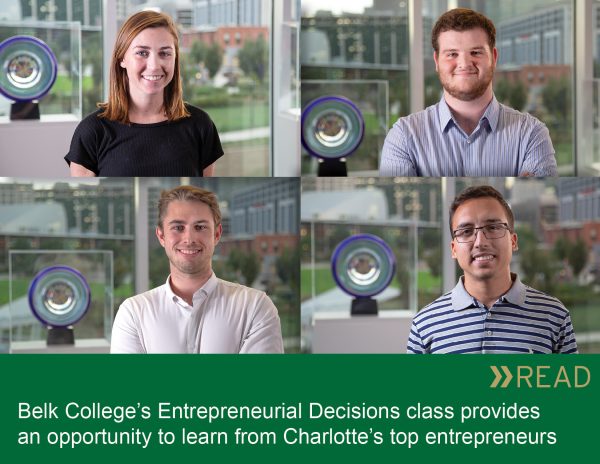 Although dedicated to boxing, Brock knew that his chosen sport was part of the entertainment business, and success, in part, hinged on branding and promotion. A scholarship to Northern Michigan University, home of the Olympic Training Center for Boxing, evaporated due to funding cuts. So, the budding entrepreneur did what many others have to do when faced with adversity – be prepared to change course. He enrolled at Central Piedmont Community College, and later transferred to UNC Charlotte, where he majored in finance.

“I owe a great deal of my success to UNC Charlotte and the Belk College. All along, I knew that to build a boxing career, I would need to learn the finer points of business,” Brock noted. “Belk College taught me the marketing, accounting, the economics that I needed. College makes you a well-rounded individual, and in business school, there were lots of team projects that enabled me to learn how to communicate, delegate and negotiate – all key skills needed in the entrepreneurial sport of boxing.”

Following graduation, Brock worked briefly for Bank of America, but he continued to train and compete professionally.

Calvin Brock, the Boxing Banker, became his own franchise, and he assembled the team to advance his career, which meant selecting the right trainer, promoter, publicist and corner personnel.

“Boxing is the most entrepreneurial sport there is; I was the living, breathing embodiment of the product, so all my decisions had to be very strategic,” said Brock.

And all his planning and discipline enabled Brock to reach the pinnacle of his chosen sport. The crescendo came on Nov. 11, 2006, when he challenged Wladimir Klitschko for the heavyweight championship of the world.

A seventh-round loss to Klitschko and subsequent retinal damage from a 2007 match against Eddie Chambers would end Brock’s boxing career prematurely. 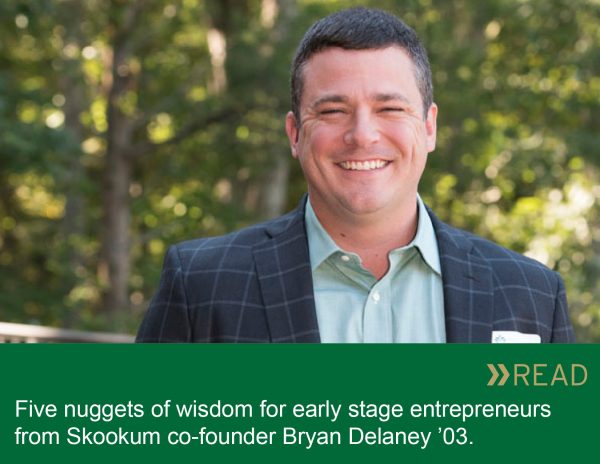 But his passion as an entrepreneur enabled him to re-invent himself and launch the national venture Jack and Landlords, a guarantee company that works with leasing companies to eliminate the upfront security deposit for renters. Through Jack and Landlords, landlords still receive a full month’s rent guarantee for damages, while tenants spread out the guarantee across 12 months at a reduced rate.

Brock said such an arrangement is mutually beneficial to landlords and tenants. For landlords, it is an opportunity to reduce turnover rates, lower operating costs and decrease disputes associated with deposits. For tenants, they eliminate the need for a large cash outlay to move in and could realize a rent reduction starting in the second year.

Recently, Blueberrie Private Rental Leasing, based in Las Vegas, Nevada, partnered with Jack and Landlords to lease 4,600 properties. Instead of an upfront security deposit, tenants will pay a smaller amount that is added to each month’s rent during the first year.

Key to his new opportunity was taking advantage of the many lessons he realized along the way, including learning through working for someone else and getting to know the customer. After boxing, Brock worked in commercial real estate and recognized that security deposits, while essential to business leasing, were a “pain point” for residential renters. Identifying the pain point is where the entrepreneur excels.

“Learning about customers’ pain points enables you to uncover the niche to meet their needs,” said Brock. “If customers have a need, there’s a demand not being met, which gives an entrepreneur an opportunity to fulfill.” 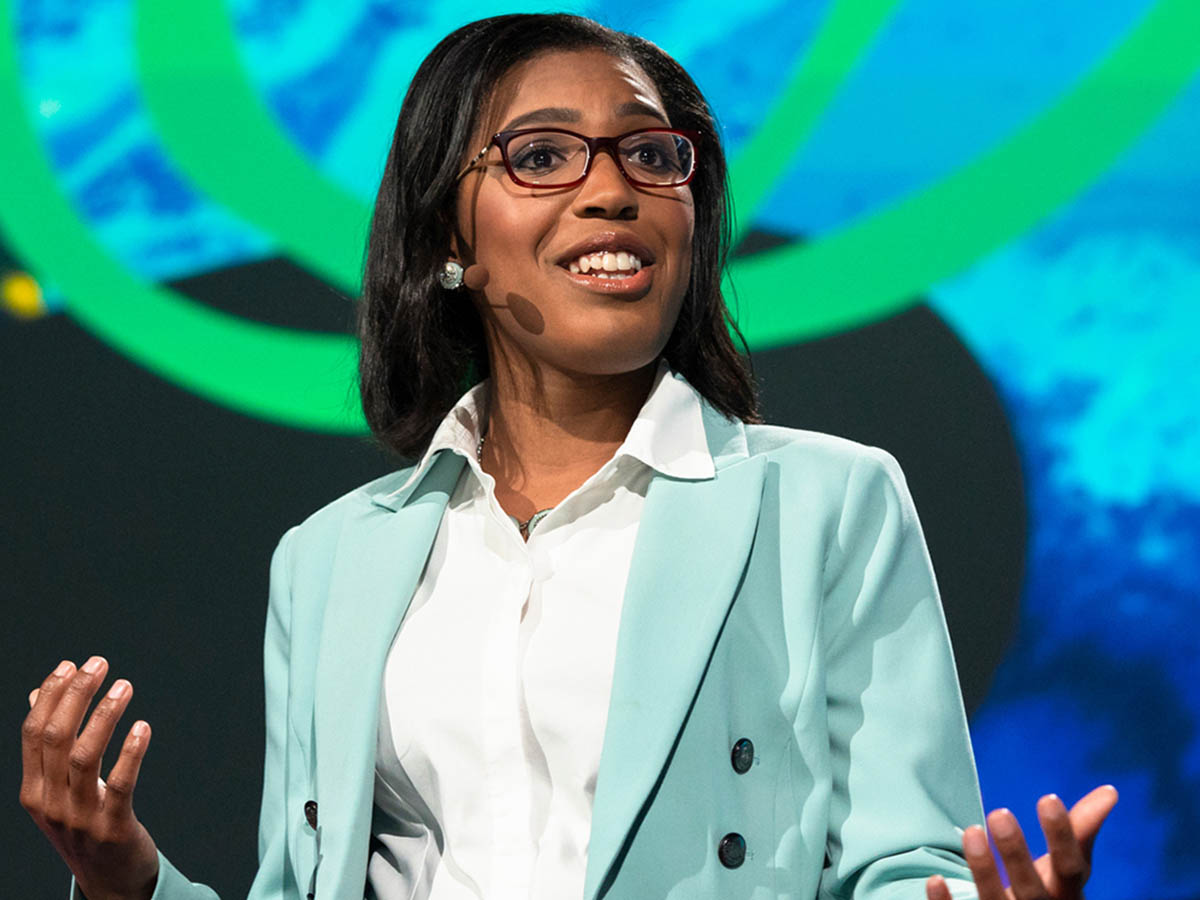 DeAndrea Salvador (’13) remembers sitting in her grandparents’ Charlotte living room and listening as they shared stories with neighbors about struggling to pay high utility bills.

Years later, as an economics major at UNC Charlotte with a minor in anthropology, Salvador combined her educational skills with a long-held passion to help low-income Charlotte residents learn ways to control residential energy costs.

Her goal was to try to do something tangible to assist families living in so-called energy poverty, which occurs when a household spends more than 10 percent of its income on energy expenses.

“I recall thinking, ‘There has to be something I can do. Let me look and perhaps find ways to help,’” she said.

“I found there are gaps in addressing the need of high-energy burdens.”

After transferring to UNC Charlotte from Wake Forest University, Salvador engaged with faculty members in the Belk College of Business and joined a business fraternity. She also interned with Apple and the Electric Power Research Institute, among others.

Using some of the lessons she learned from internships and faculty members such as economics professor Peter Schwarz, Salvador began to research the issue.

“I found there are gaps in addressing the need of high-energy burdens,” she said. “I discovered I am equipped to perform cost-effectiveness analysis and apply for grants–and can use the skills I acquired to chase after the dream that came from working collaboratively with so many groups. It really became a passion.” 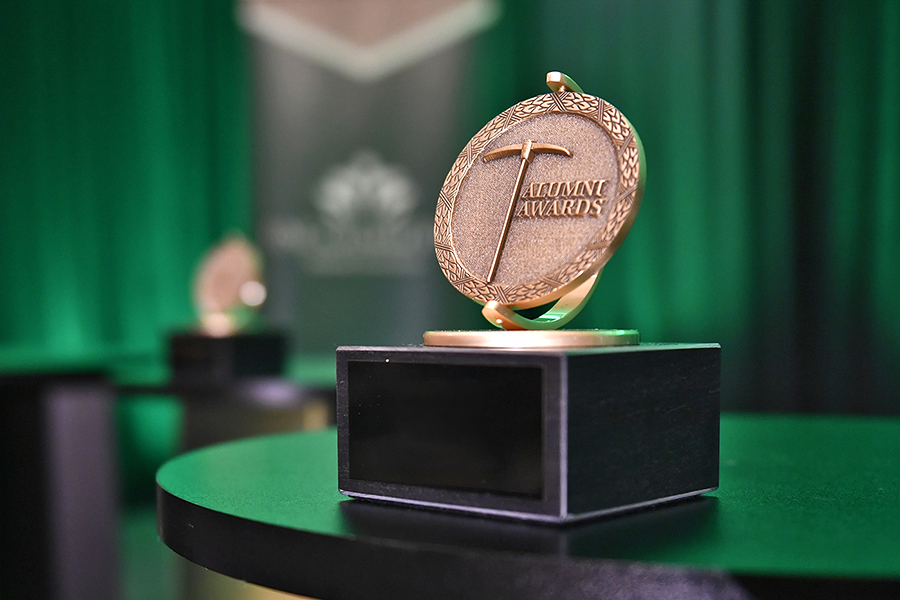 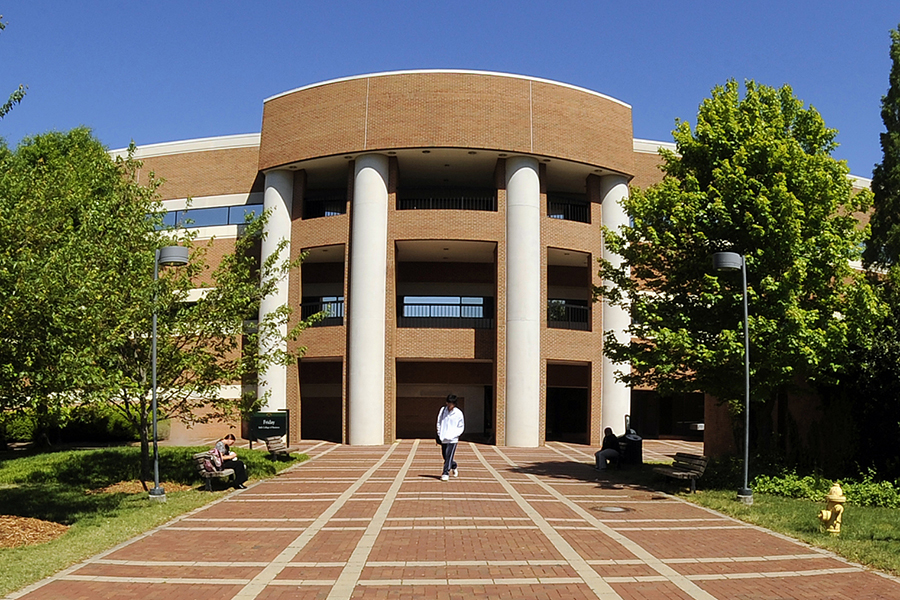 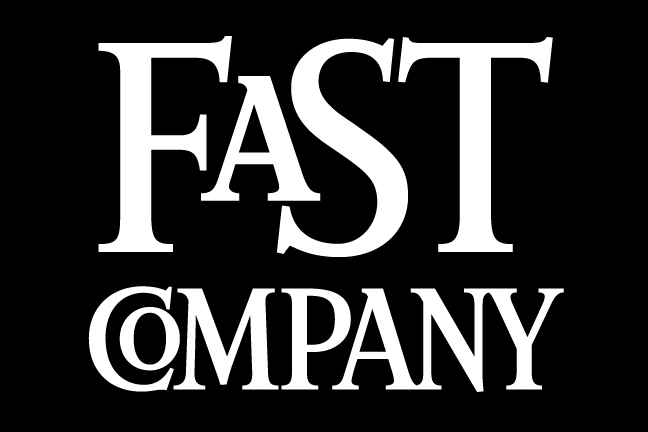 After she graduated, Salvador founded the nonprofit Renewable Energy Transition Initiative (RETI)in Charlotte. RETI aims to sustainably decrease the costs of low-income families, with an emphasis on education and behavior changes.

“This issue must be addressed in a more holistic way,” she said. “I am fortunate to pursue this as a career; regardless, it would have been a hobby.”

Her efforts have been noticed.

In April, Salvador spoke in Vancouver at TED2018 as one of 20 fellows chosen for the TED Fellow program, which was established to bring together innovators from around the world to address global issues.

“25 million Americans skipped meals to provide power to their homes in 2015." We need to provide equal and reliable access to energy, says @DNewmanSalvador, founder of @RETISET #TED2018

Salvador sits on the board of directors for Youth Empowered Solutions (YES!), which empowers young people to create community change. She also serves on the Mecklenburg County Air Quality Commission, addressing air-quality improvements and concerns.

Most recently, she was selected for the UNC Charlotte Young Alumnus Award, which she received on April 20. Her economics professor, Peter Schwarz, wrote the nomination.

“Since DeAndrea earned her degree from UNC Charlotte, she has had a series of accomplishments of increasing importance” he wrote. “She has persevered through challenges, driven by her passion for education and assisting the poor. Since her graduation, she has created nonprofit organizations, sought funding, communicated through writing and conference presentations, and reached out to other UNC Charlotte students.”